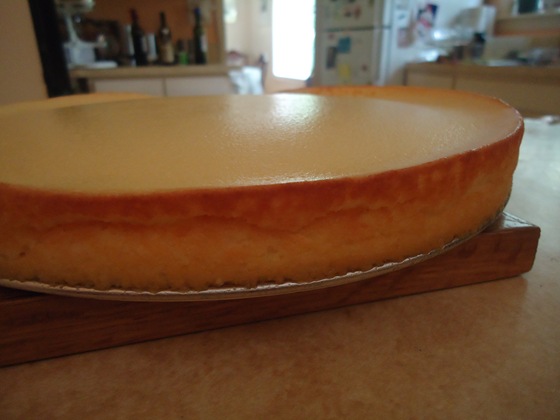 I made a cheesecake to bring to a pool party. Is that cruelty towards future swimsuit self-esteem for attendees at said party? Oh well!

I had been craving goat cheese cheesecake since I sampled Lyon Hall’s fabulous version at my farmer’s market, which has a very cool and delicious Visiting Chef series. We had lotsa leftover goat cheese from my sister’s birthday party. We were headed to a big family gathering (including my wonderful precocious cousin Kayla visiting from Denver) so it seemed like a great celebratory goat cheese cheesecake moment.

So fun. Cake is such a ritual! Whipping things together… 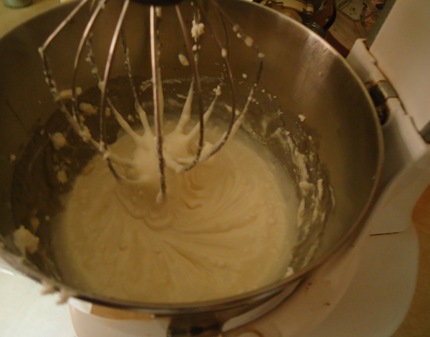 I did actually use some creativity on this recipe, including capitalizing on my sister’s hilarious birthday gift: 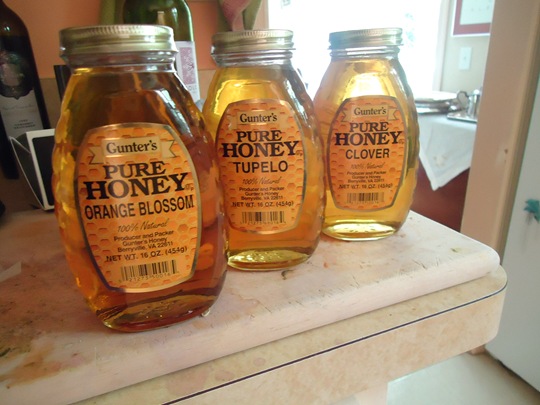 Malindi mentioned liking honey, so Steve bought her… a lot of honey. Local honey from Virginia! So anyway, I included it in the cheesecake for a special flavor.

The batter was thick, creamy, and ready to pour. 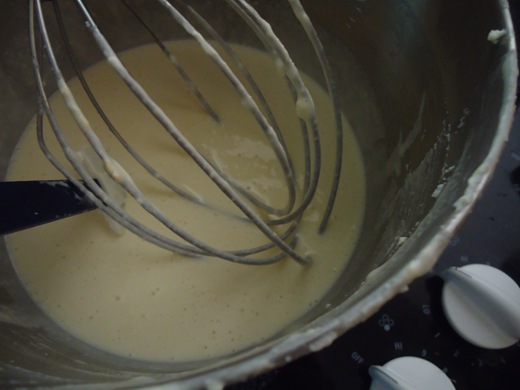 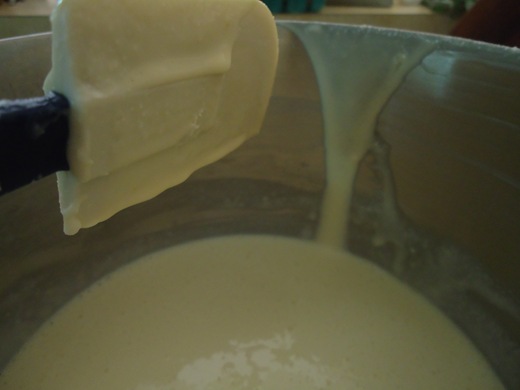 I got out the gorgeous shiny springform pan I inherited from my grandmother. 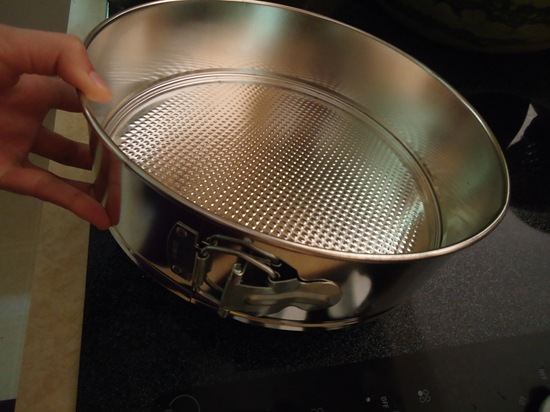 Watched the batter pour in… 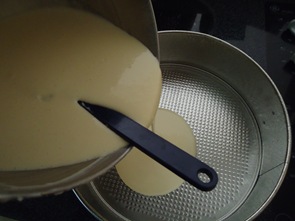 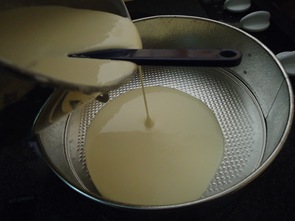 And baked it up til lopsided but authentic, it emerged from the oven. Trying to remove it from the base of the pan was definitely not worth it. 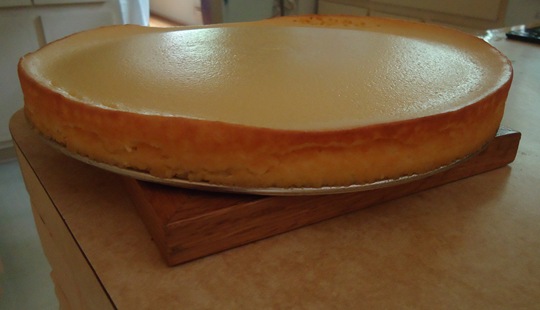 (recipe published despite the fact that it was sort of too soft in the middle. Cook longer? Thicken somehow? Could it be cause I used reduced-fat cheesecake? Except Cooking Light Recipes do that all the time. But should I’ve used block-style instead of tub style? Dunno)

Whip together ricotta, cream cheese, goat cheese, sugar, and honey until combined. Slowly beat in one egg at a time. Add vanilla and lemon zest, and combine. Pour into a greased 10 inch springform pan.
Bake 350 for 20 min, then reduce heat to 300 and bake an additional 40 minutes, or until middle is just SLIGHTLY jiggly (or, yknow, more? I thought you were supposed to leave it a little soft in the middle cause it kept cooking a bit… but whatev)

Topping isn’t really a recipe- just threw some strawberry and mango chunks in a saucepan with a splash of water and honey. Til… soft. 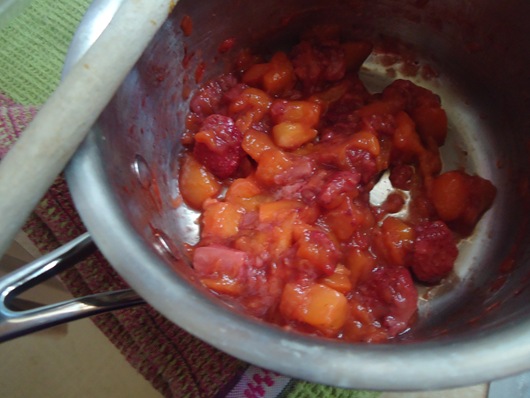 On top, the final thing! 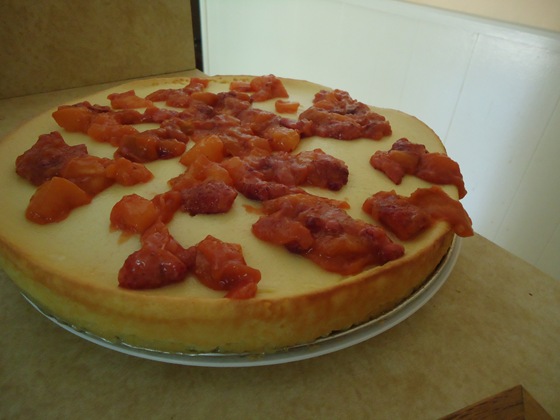 Hilarious: I arrive at the party and put my cheesecake in the fridge… atop my aunt Nan’s key lime cheesecake. Fortunately both were delicious and ended up making a rather fantastic pairing. Symbiosis! 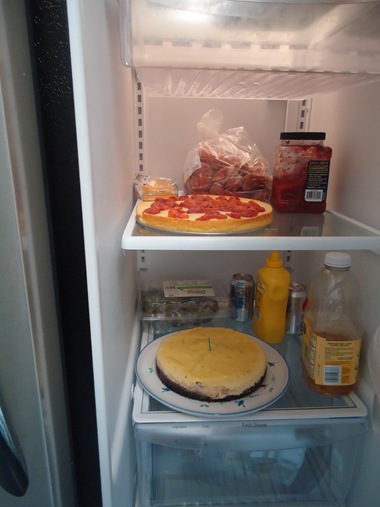 And so I arrived at my cousin Chris’s house. He is like 27 and owns his own home. With a pool. Ladies, he’s single!

Immediately some punk took my sunglasses. 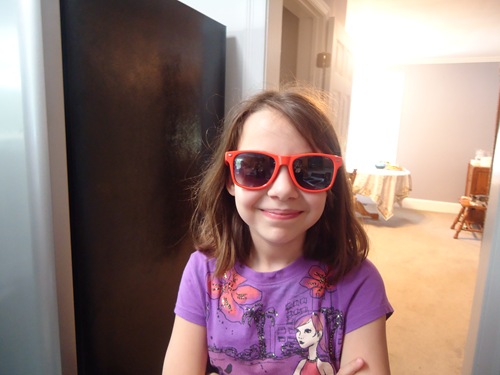 Me, the kids, and my young-at-heart boyfriend took to the pool. Ahh, the refreshment. And then the boys got out the Super Soakers and it all got violent/fun. 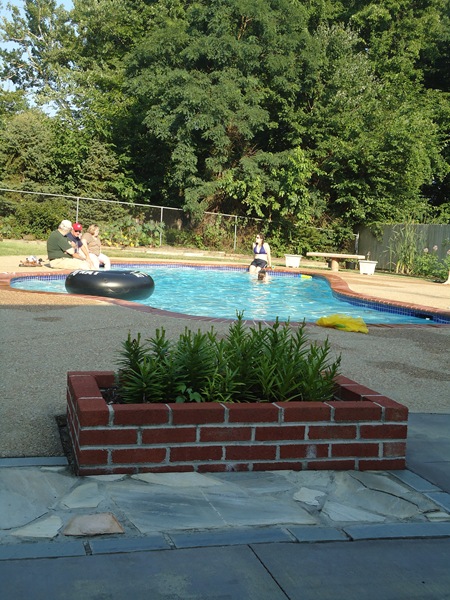 In terms of cooking, my aunt Kathy was basically the hostess (Chris says, “I just let people use my house.” Apparently his neighbors had a party there when he was out of town… as he learned when he returned). She made one of my FAVORITE of her recipes, Extra Green Green Goddess dip. 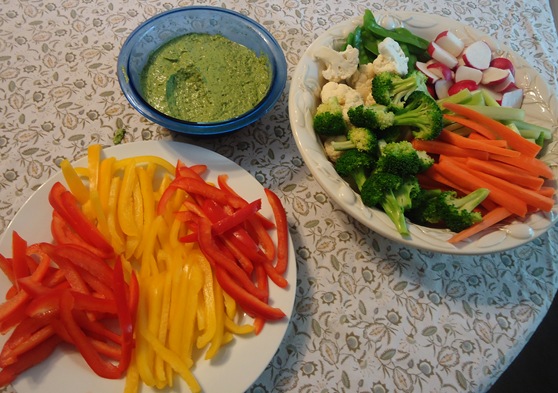 Two of the Greek –pitas pies. I helped slice and plate these when they came out of the oven which meant, of course, heavy nibbling. 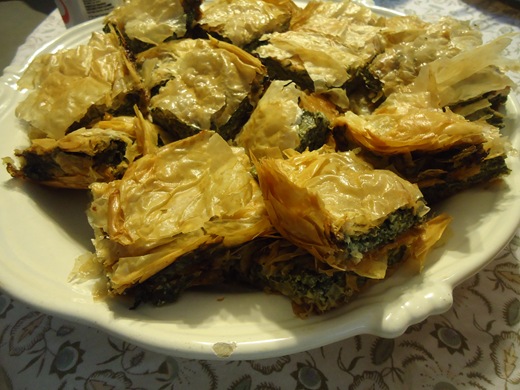 And kolokithopita- squash pie using the squash my uncle Tom grew in his garden. Fantastic! 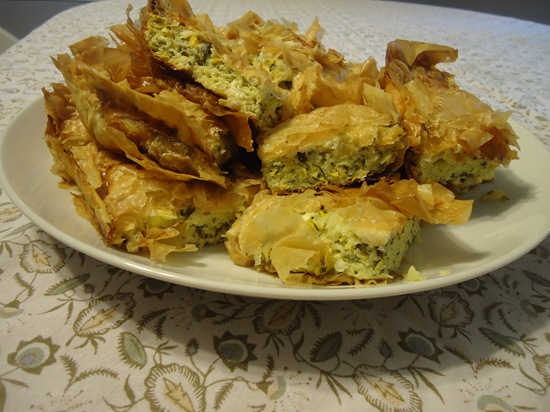 On the meat front, I definitely failed to capture a picture of the sausages or the lamb burgers, but both were great. Did get the condiment! Wonderful tzaziki (classic yogurt ‘n cucumber ‘n dill spread). 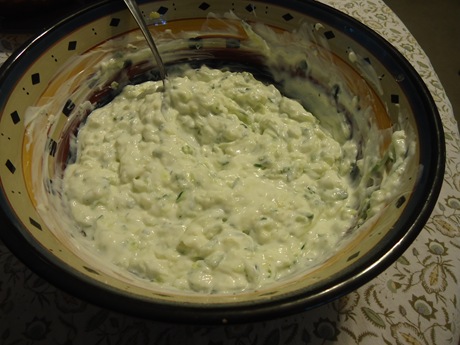 Also courtesy of Kathy, some sinfully good macaroni and cheese. She has a whole relationship with the recipes of Giada de Laurentiis, and this was another winner. 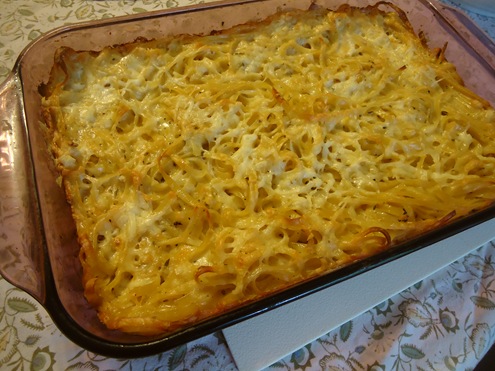 Someone (apologies for not knowing who. Dena?) made this truly exemplary black bean salad. They can be kind of boring (like, uh, when I make them?) but this one had a fantastic zing to it. My cousin Lara is on a kale kick right now, and so brought kale chips (that were GREAT! She does them for a long time on really low heat and that is the way to go to get them looking perfect!) and also this massaged kale salad with feta and raisins that was YUM. 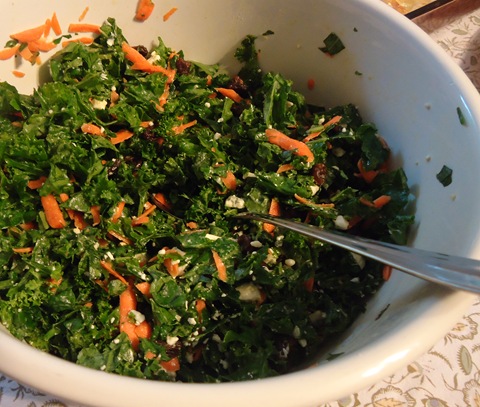 Massive explosion of fruit salad, on which I went pretty crazy. The fresh mint in there was marvy. 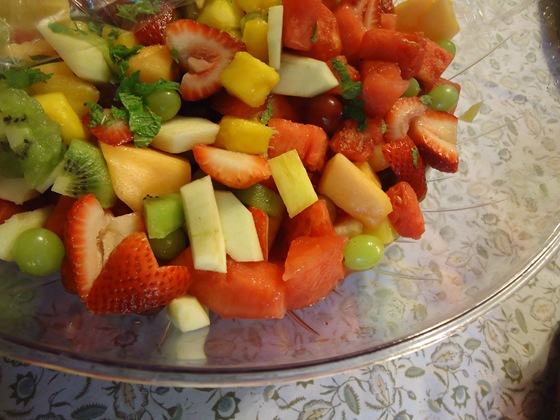 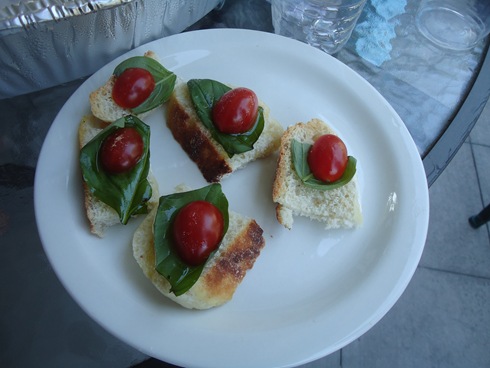 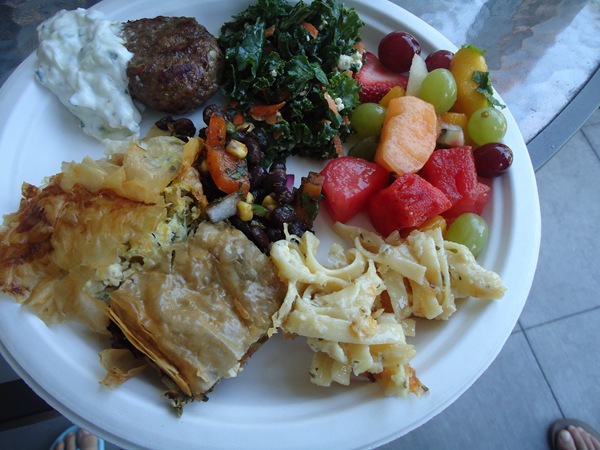 Definitely couldn’t finish my lamburger… I was kind of meat-ed out that week. So I passed it off to the boy. And stole a bite of his brat :D Delicious. 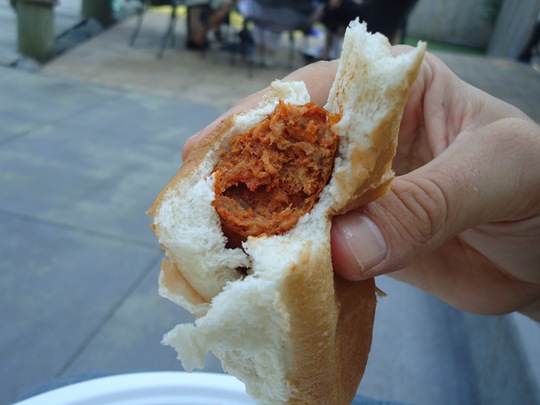 Your party plate of food looks AMAZING--as does that cheesecake!!

The basil toasts are adorable! What a cute idea :D

I usually don't like cheesecake...but you made it look so tasty!!! :)

Holybigamoly, how did you know I've recently been obsessing over whether it would be possible to make cheesecake with goat cheese? HEAVEN!