We planned on a cookout and my mom started thinking about lamb kabobs and then the birthday girl went, “Uh… actually all these years we have made kabobs I have never actually liked them.” So we got my sister, the svelte and slender girl who somehow manages to eat like a linebacker: 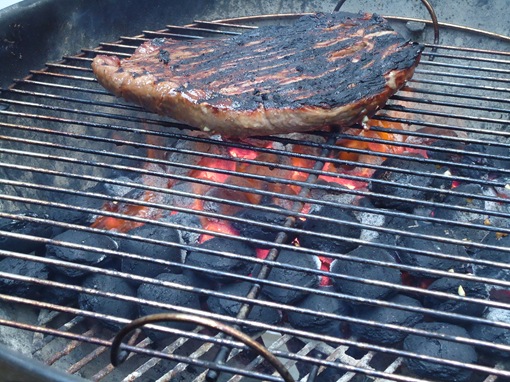 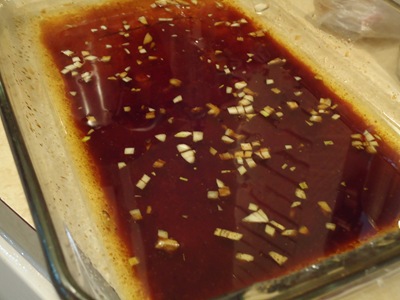 Let the big fat steaks soak up the goodness. 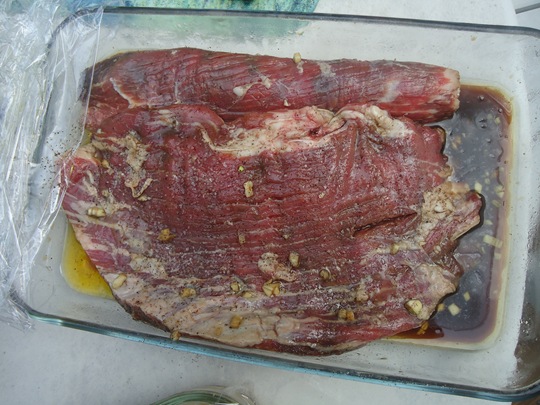 A tip from Cook’s Illustrated: to get your grill super hot for searing and to burn off any residual bitlets left over on the grate from the last time you grilled, put a disposable aluminum pan over the coals. Works like a charm! 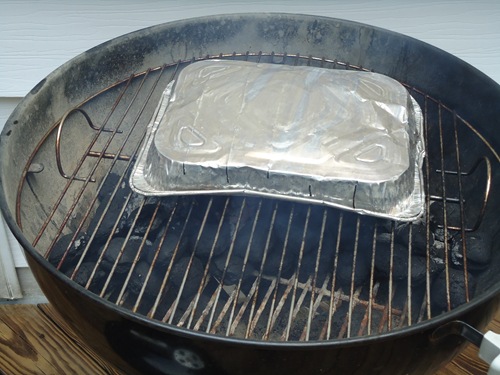 On went the steak on some gorgeous, smokin’ coals. Man I love grilling. I feel like a cavewoman. 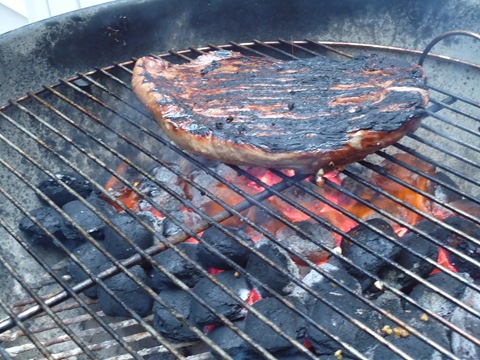 Also got some tandoori chicken. My mom is great and caters to my yuppie whims and found organic happy chicken at Costco. I have to say, deep in my heart I am totally a spoiled American who just wants to eat boneless skinless chicken breasts. Again, my mom found the marinade, which contained yogurt, garlic, ginger, and a colorful variety of dried spices. 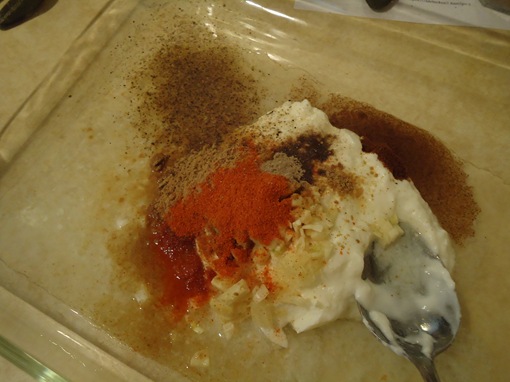 My mom’s best friend from high school was visiting from Australia (yay!) and man she is a great houseguest. We were all just kind of hanging out in our bathrobes in the kitchen on the morning of the party, doing some casual stuff to prep for the party, and then we started talking grilling. Apparently Australians just grill… everything. So she is an expert. And started talking about her chicken-breast-pounding technique. And then just… helped herself to our mallet and did all the work for us. Still in her bathrobe. 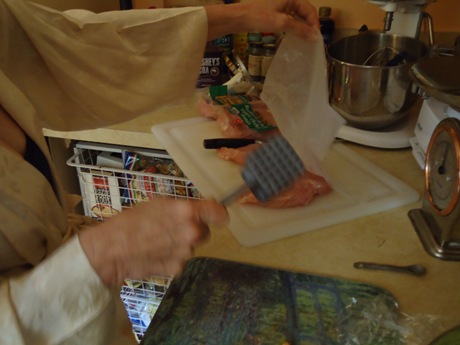 So as for the cooking… the steak grilling went great, and then the sky got REAL ominous REAL fast. Lately, every time I grill it starts raining. It’s like I cause it (well actually that would be quite flattering, if I affected the weather). Anyway, no pictures of the chicken cooking process, but thanks to my uncle very sweetly hanging out on the deck with me, shielding me and the grill with a large umbrella and helping in the flipping process, it turned out beautifully. 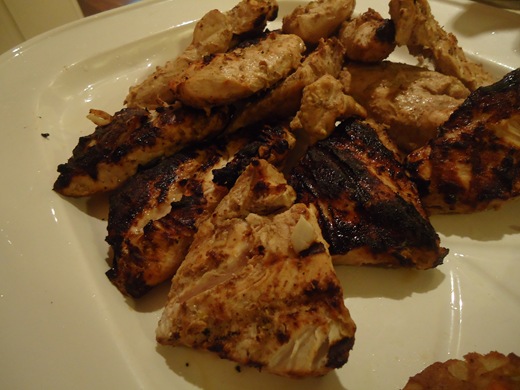 Plated that along with some quickly grilled Trader Joe’s veggie masala burgers. Those were for a last-minute vegetarian guest, who came to our house for a party despite the fact that he had returned from living in India (!) a mere two days before and was hella jet lagged. Very sweet. 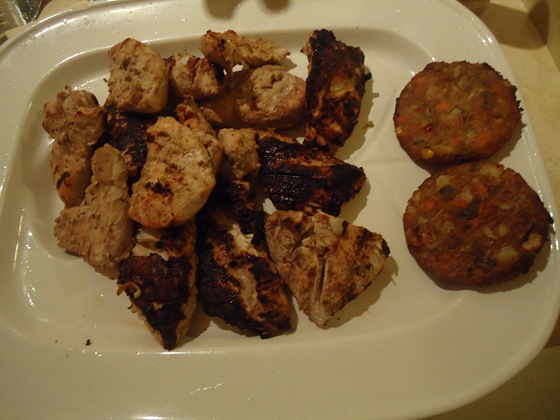 The steak was PERFECTLY rare (as far as I am concerned, once you cook a steak past medium it’s not even worth eating). I tried to spell out the birthday girl’s name… but could only fit the first three letters. Which, as she points out, spells "bad” in Spanish. But it was not. Bad. It was, in fact, muy bien. 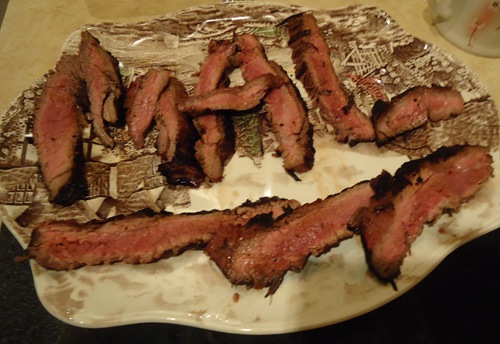 My uncle Louie, a total grillmaster, said “Kid, you did good.” High praise.

Malindi made an inventive dip that involved ricotta cheese and masala sauce (?!) and was totally delicious. She cooks rarely but quite creatively. (Why yes, we did realize we only had snowflake napkins… so we served them… in July)

Birthday girl also requested shrimp cocktail, which was plated up in our awesome clam bowls. 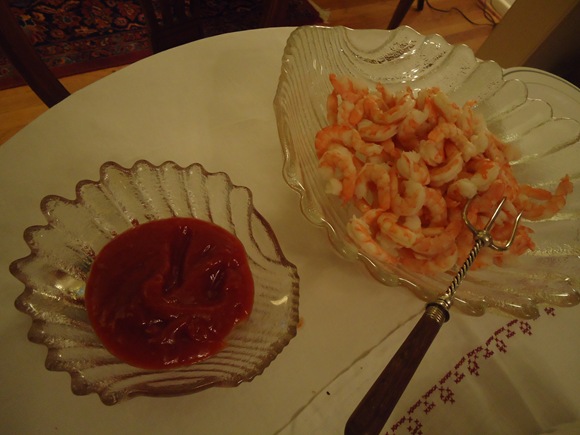 And yknow, we just like cheese. So we got some goat’s stuff and plated it up with chives picked from the deck and some beautiful farmer’s market cherries. 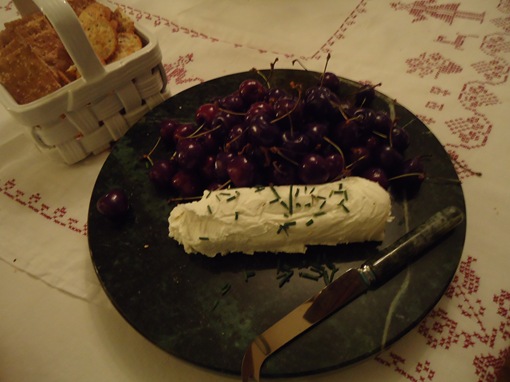 My cousin Lara said she was in a “cooking mood” and made this absolutely unbelievable eggplant and walnut pie. It had two kinds of cheese. Like… could you go wrong? No. No you could not. 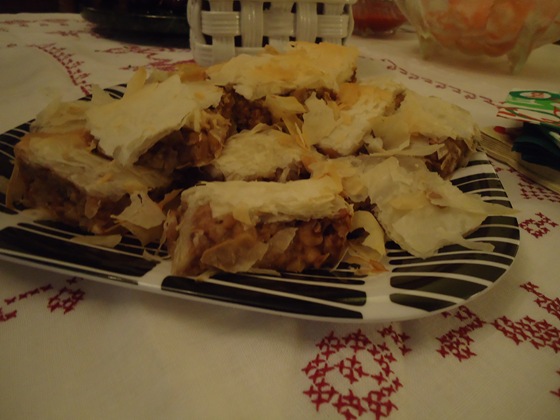 My plate, which also included a simple arugula salad with basil and tomatoes; my mom’s homemade Greek potato salad with fresh deck-grown oregano; and some seriously awesome couscous salad made by my aunt Dena (it involved asparagus, sundried tomatoes, herbs, and FENNEL!) 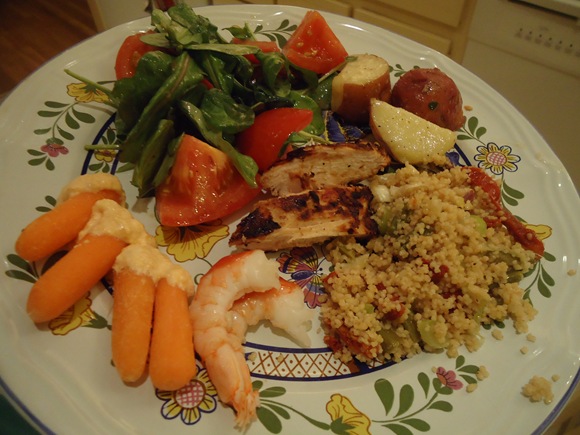 But actually… everyone was just kind of biding their time until dessert.

My grandmother, in her heyday, was a dessert fiend. I mean, she made unbelievable meals, too. But she had some signature desserts: banana cake with caramel filling and seven minute frosting. Pear tart. Strawberry-rhubarb tart with orange custard sauce. Plum cake.

But this time of year, what everyone in my family thinks about the most is her ice cream sandwiches. Chewy ginger snaps. Homemade lemon ice cream.

So, the fates aligned. We inherited her ice cream maker. My aunt, in the family cookbook she put together, discovered the recipe for the cookies that was actually torn out from Gourmet (available here: Gingersnap and Lemon Ice Cream Sandwiches).

So I got to work.

Whisked together eggs, some half and half, sugar, and lemon zest and juice. 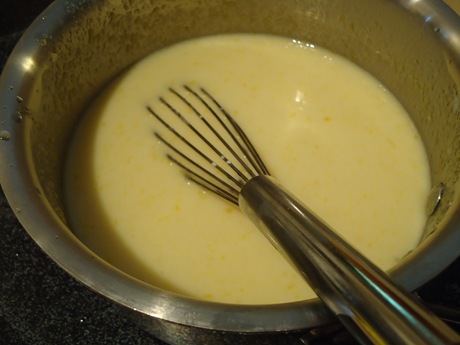 Brought just to a simmer… 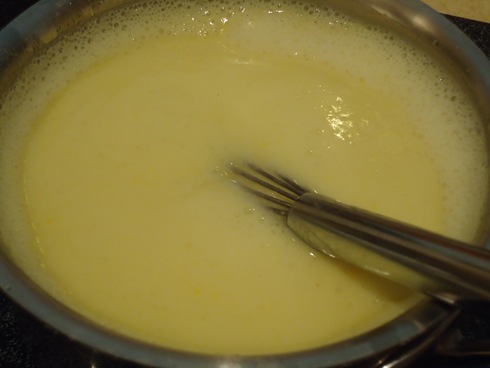 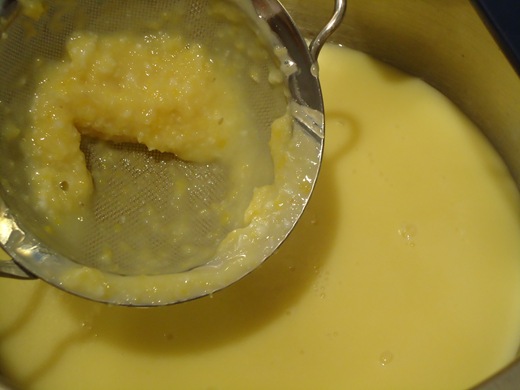 Added more half and half, and froze in the ice cream maker. Beautiful. 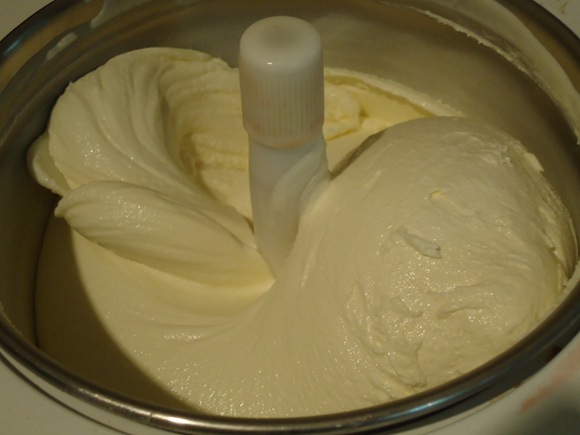 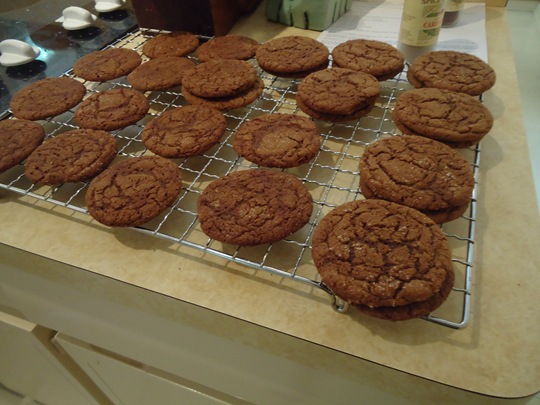 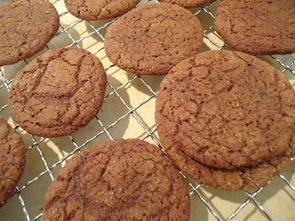 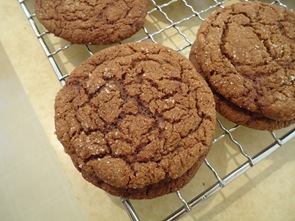 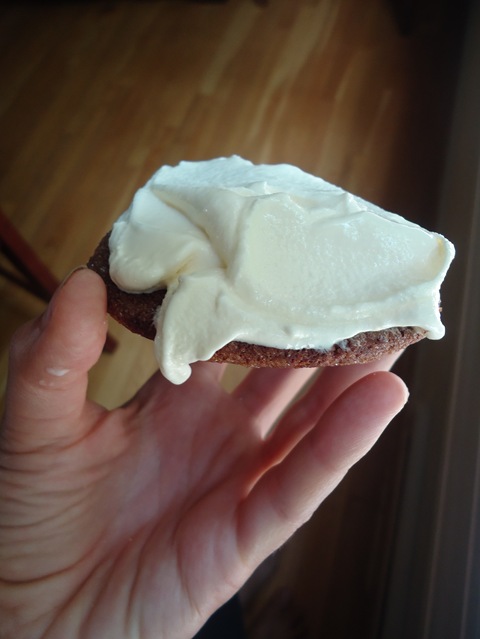 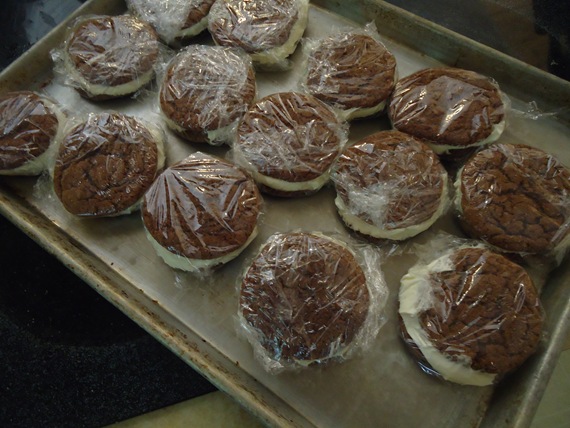 My family went kind of insane. Louie and Robert spent the entire time making inquiries about when they would be served (Malindi was a good sport but pointed out, “Not that many people mentioned my birthday. Everyone mentioned the ice cream sandwiches”). When they were served, my cousin Lara said “I love you. I don’t tell you that enough.”

I felt rather tense about the whole thing: when something was the specialty of someone who has passed on, you take on a certain amount of pressure when you make it. Watching Louie bite in, I held my breath til I got an approving nod. Lovely!

These are really good. Everyone should make them!

Anyway, lest we forget, this was a birthday, and my mom and sister had made their own contributions!

My mom made a rich, buttermilk-fortified chocolate cake with homemade marshmallow icing. 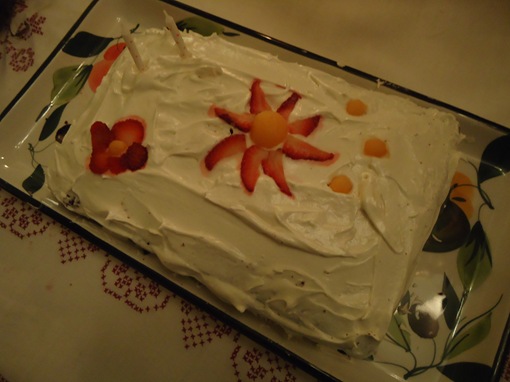 My sister did the decorating. Cantaloupe and strawberries. Classy, right?! 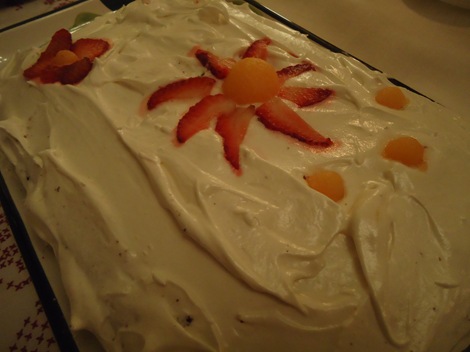 The birthday girl made her own cake: pound cake that contained three sticks of butter, 6 eggs, a pound of cream cheese, etc. 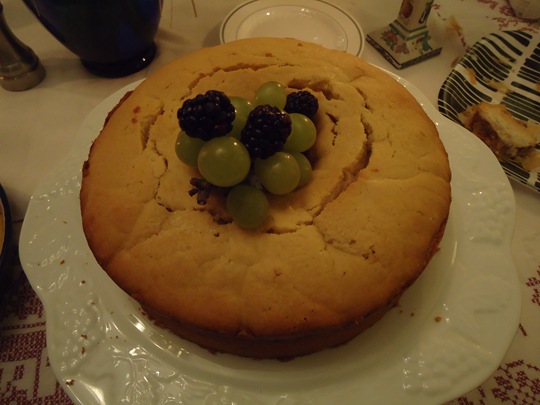 It was, as you would expect, unbelievable. SO rich and heavenly.

And my aunt Nan made clafoutis, a lemony, puddingy cake with fresh raspberries. SO good. 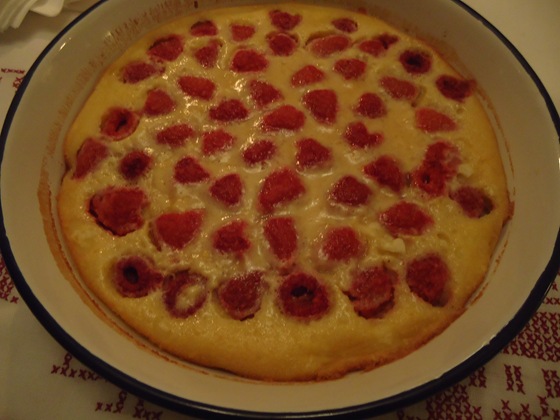