So anyone who has spent any time with me in real life has figured out that I am a control freak. Like, pretty intensely. Never is this more manifested (at least in my head; hopefully it’s less visible to others) than when there are leftovers in my house.

To clarify: not my leftovers. Other peoples’ leftovers.

You would think that being a foodie, I’d enjoy getting food related gifts. Sweet treats, dishes made from exotic recipes, restaurant leftovers. But quite honestly, the only gift I’d really like is some sort of raw ingredient. That I can cook, MY way, knowing EXACTLY how it was prepared and WHAT went in it and the health implications thereof.

My aunt gave me a pumpkin one time. It was great!

Anyway, we never host Thanksgiving and are always sent leftovers from whatever we attend. This year was no different, since my aunt Jeanie, whose wonderful Thanksgiving I attended; and my aunt Joanne, who picked my mom and sister up at the airport the day before Thanksgiving, ordered them home, and promised them Thanksgiving delivered to the house, did too.

So this year, I decided to try and just CHILL OUT and ENJOY THE LEFTOVERS.

For this particular lunch I was helped by the fact that I got to eat outside, due to it being in the MID SIXTIES despite the fact that it is LATE NOVEMBER! Gosh, lucky me :D 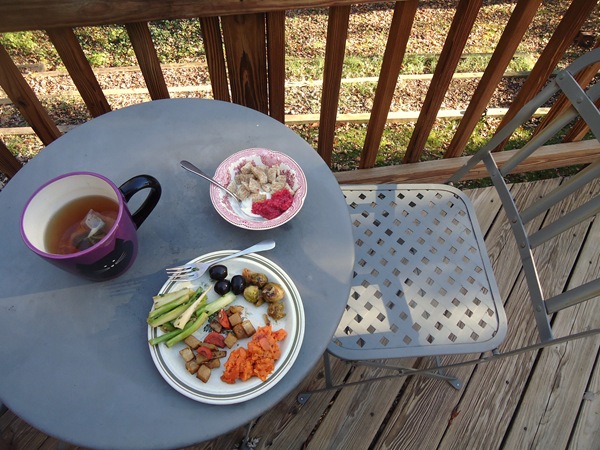 Along with a bucket of tea, I made a wonderful Whole Foods Hot Bar-esque plate. It’s great having lots of different things to taste! This is the ultimate for me! I should enjoy it! 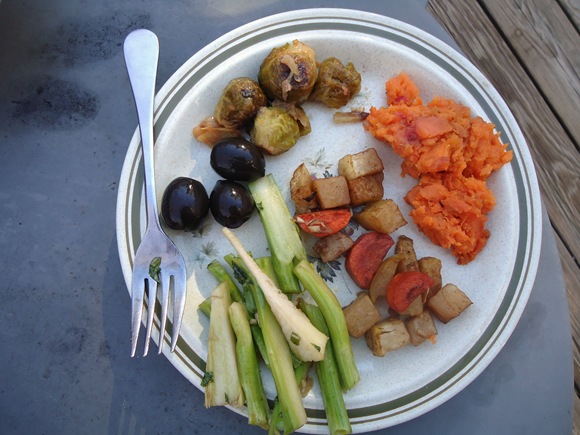 Starting at the mashed sweet potatoes and going sideways, there are those wonderful orangey mashes of delight; my roasted veggies; some broccoli stem relish (that I’ll post about sooner rather than later); black olives (I know fancy shmancy sour olives and wrinkly olives and all that are the gourmet things to enjoy but I had forgotten how much I loooooove BLACK OLIVES FROM A CAN!); and brussels sprouts.

Even better was the side dish:

Greek yogurt, shredded wheat, and the most EXTRAORDINARY cranberry slaw/relish thing. Don’t know how it was made but it’s marvy! 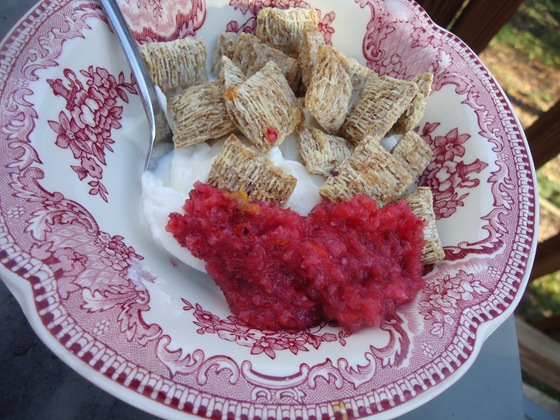 But wait! There’s so much more!

I feel like it’s such an obvious choice after Thanksgiving or any mashed potatoes occasion to make shepherd’s pie.

We had indeed been sent home with mashed potatoes (and though mashed potatoes are one of those foods that incite my control freak tendencies, these tasted delicious and fresh, and not positively overloaded in butter. You also just use a thin layer of them as the topping, as you’ll see, so I consider this a healthful choice.)

But wait! I not only had leftover mashed potatoes. I had leftover VEGGIE BURGERS, having made a batch of my lentil burgers earlier in the week. 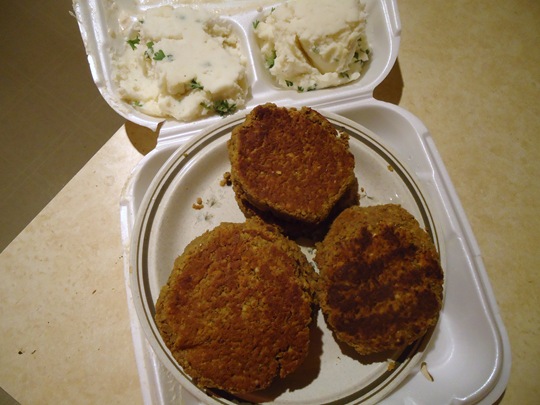 I had previous made and loved Cooking Light’s wild mushroom lentil cottage pie, so I roughtly followed its methodology.

I sauteed carrot, celery, and onion to tenderness, then added some mushrooms.

Then deglazed with a splash of veggie broth. 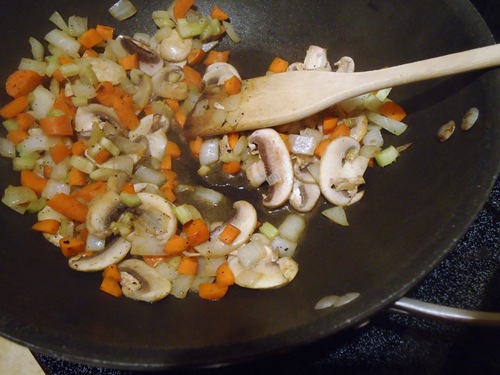 Rather than adding cooked lentils, I crumbled in my veggie burgers. I used considerably less vegetable broth- maybe 1 cup total. To enhance flavor, I added red wine vinegar and some ketchup. 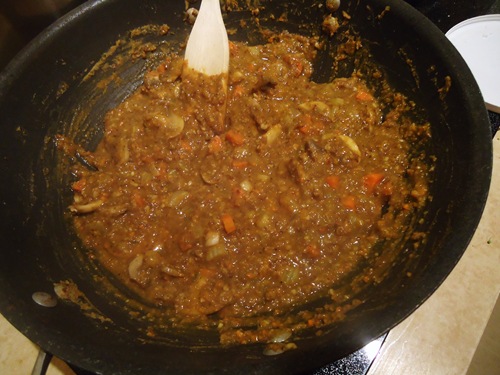 It looked somewhat astonishingly meaty; and also did a beautiful job of thickening up as it baked, producing a texture (though not a flavor) very reminiscent of traditional shepherd’s pie.

By far the most fun activity- frosting the pie!

By which I mean smearing on mashed potatoes.

This was fun but I also had a slightly control freak-y moment when I worried I’d run out of mashed potatoes. But I did not. And got really the perfect layer. 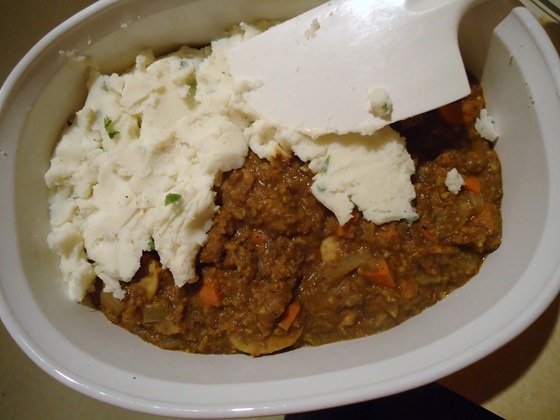 When my pie emerged from the oven it had charmingly sprung a “gravy” leak in one corner, but goodness the potatoes were lovely. 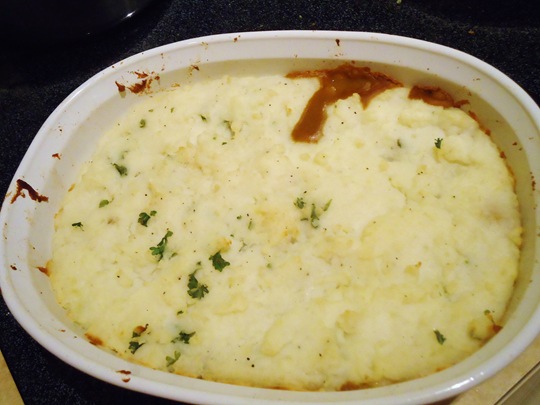 As for the taste, my mom and I chowed down on roughly three fifths of that big pan there. Very nice.

Finally, this is the ultimate in my control freak tendencies: when I inherit something I’d never in a million years make on my own.

So when I get sweet potato casserole… with sprinkles on top… I am left slightly befuddled. 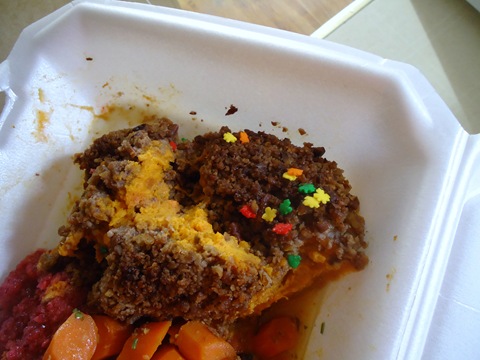 BUT in these circumstances, just MAKE SOUP.

Really, when the world throws you a curveball, it is just always a good idea to make soup :D 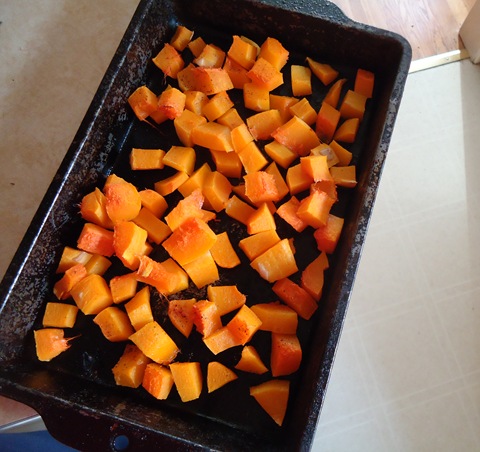 Compatible in flavor, adding a nice texture to sink one’s teeth into, the butternut squash did a PERFECT job of bringing this soup together.

And lo and behold, all that butter and sugar and pecans? It made for a DELICIOUS soup. 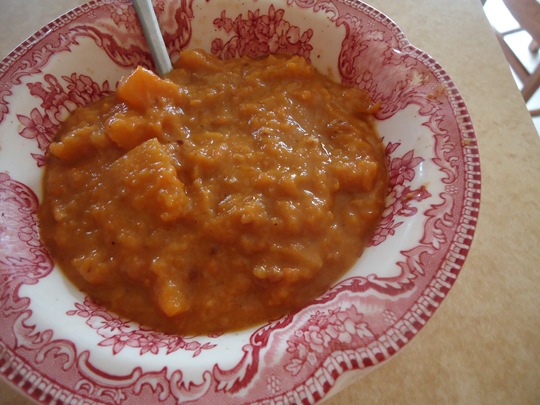 In fact, it was positively INSPIRED and never something I’d make on my own. So there, control freak. Let a little outside influence in.