I got an email forward with a series of horrifying but real vintage advertisements. There were, unsurprisingly, many extolling the virtues of cigarettes and sexism, but this one struck me as particularly… frightening! 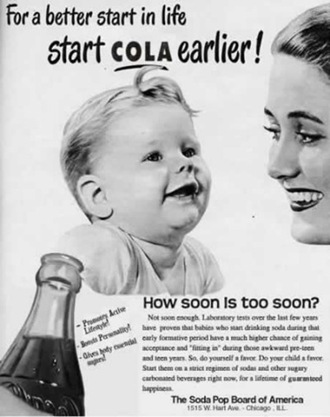 Yes, give your BABY some nice COLA. Good God. Laboratory tests over the last few years have proven [!] that babies who start drinking soda during that early formative period [!!!] have a much higher chance of gaining acceptance and “fitting in” during those awkward pre-teen and teen years [!!!!!!!!!!!!!!!!!!!!!!!!].

This started me on a nostalgia trip, which continued when I made a dinner featuring one of my late grandmother’s favorite ingredients (more on that in a minute).

My mom’s parents lived in the 50s and 60s, but were decidedly not of that generation. Culinarily, certainly (no nasty prepackaged food for them- my grandma taught basically my entire family to love real fresh gorgeous food and cook our brains out), but in general. Yes, they joined in the baby boom with my mom and her three siblings and yes my grandmother stayed home with the kids but in all the ways that counted they were crazy progressives.

A small example of this is when my grandparents moved to London in the early 60s (my grandfather was in the army and on assignment there) they singlehandedly integrated their neighborhood by renting their house to a black family. The husband was so stunned that they agreed to rent him the house right away that he wanted to sign the lease immediately and my grandmother said “Don’t be silly. You have to let your wife see it! What if she doesn’t like it?!”

When we miss my grandmother, because so many of our experiences with her involved delicious food, we tend to cook things in her memory.

One of the ingredients she always picked up at the army commissary (an excellent perk of being a colonel's wife) was this: 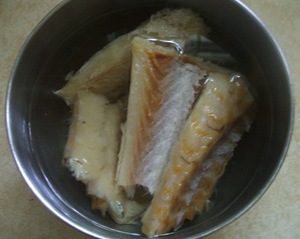 Salt cod! It’s been sitting in the back of the refrigerator for eons (but it’s not like it ever goes bad). I knew before I started working with it I had to get the salt out, so I soaked it in water, changing it every once in awhile, for a few days (meant to be one but we made spontaneous plans!)

I happened upon this scrumptious looking recipe for potato cod cakes and thought of our nice farmer’s market spuds and went “perfect”!

In a wonderful, energy- and water- saving moment, I boiled the cod (the recipe called for cooked cod and sources I consulted said start it in cold water, bring to a boil, then simmer five minutes) and then just put my steamer on top of the hot and salty water to steam the potatoes! Beautiful.

When all the ingredients were combined (I halved the recipe and replaced the red pepper with celery- what we had) it looked like this: 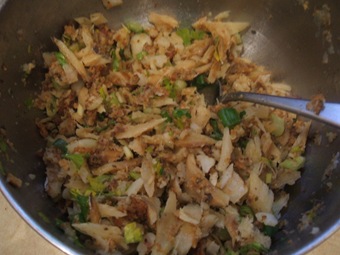 Once pan fried, a few of them looked absolutely beautiful: 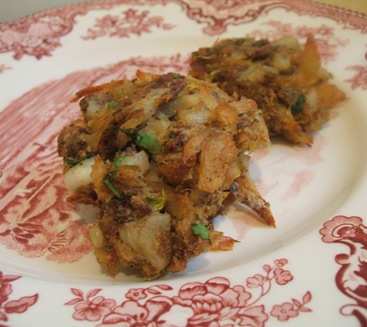 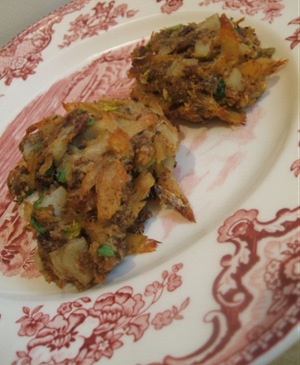 As for the rest, however? If the cod-cake mixture looked not particularly cohesive to you, that’s because it WASN’T. Once again my irresponsible ingredient substitutions led me to Hot Mess territory. I’m thinking of making that a tag at the bottom of my posts… hot mess. This week alone!

We’ll call what I ended up with… “salt cod and potato hash.” Sure. 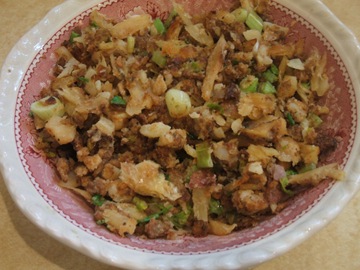 Actually, thinking back to Grandma, she would be totally chill about this. You’d go to her house for baked potatoes and she had sliced them too thin and cooked them too long and the result was “homemade potato chips” (which were, um, amazing).

You all know my thoughts on mayo, so I ignored the sauce in the recipe and instead made this yummy concoction that keeps in the sweet-sour-creamy-mustardy spirit of the idea without the mayo-y grossness: 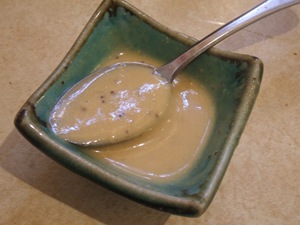 One more Grandma-inspired dish: got some beets at the farmer’s market, thus, beet greens, thus, HORTA! Greek greens. Take dark bitter greens. Wilt ‘em in the manner of your choosing (I dumped a little boiling water in the pot with them and let it evaporate) and then drizzle with olive oil and lemon juice. 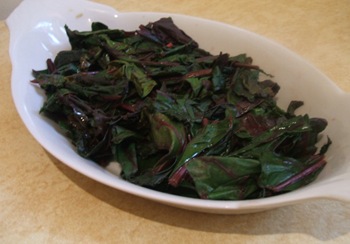 Since I had a pound of the cod and the recipe (halved) only called for 12 ounces I put the rest in a ramekin with tomato sauce and tapenade (tomatoes and olives are a traditional pairing with salt cod in Italy, I learned in my research) and baked it along with the cakes. We’ll see how it is! 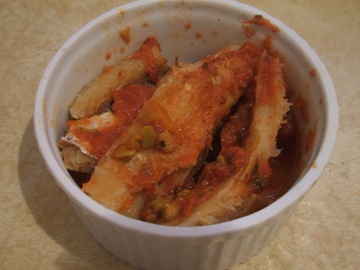 Labels: about me, dinner, fish, greens

that ad is absolutely absurd! you make a fantastic point.

hope you have a marvelous evening,
Bec

It's amazing what was once thought of has being good for us. Insane. Glad you were able to salvage dinner with a hash!

Mercy, that ad is insane!! Hysterically funny in a rather terrifying way, though... :-) Thank you for sharing it with us! :-)

Your grandmother sounds like a truly incredible person! So beautiful that you cook dishes in her memory...

I think the cod and potato hash looks incredible!! So comforting and flavorful and totally YUM! :-)

That ad is ridiculous...

Your grandmother sounds like quite the woman!! Amazing story :)

That ad is insane! Can you even imagine?

How sweet your grandmother sounds. This is a great post:)

Thanks for stopping by my blog today. It's so fun to "meet" you!

Start cola earlier?! Noooo! And your grandmother sounds like such an amazing woman. I love the integration story :)

yea that ad is crazy. im guessing people were brainwashed.. since coca-cola was able to turn into a multi-billion dollar corporation lol.

I saw a mom (couldn't be even 18yrs old yet) feeding her kid coke the other day. I was appalled.

That add is kind of hilarious. I can actually see the whole "social acceptance" thing, since I was a social outcast with my carrot sticks and pink plastic water bottle in elementary school among the Cheetos and cans of Coke, but uh...yeah, not exactly healthy.

Can you imagine if we still had ads like that? Crazy....

That ad is crazy, I just wish my dad would get up to date. He drinks sooo much diet coke it is disgusting!

i love those fish cakes!

i can't believe that ad! how crazy! sadly, people will believe it and start trying to give their babies soda.

I'm so sorry for all the people who saw and believed all those ads, I've seen quite many and they're really so horrible. People didn't have ANY idea!