So it’s been a RAWTHER tiring 36 hours. I started a new job yesterday and apparently, like so many nonprofits, “intern” is actually a synonym for “everyone’s bitch”.

So I spent all of yesterday… moving furniture. It seems an odd way to utilize their resources… since I am incredibly horrendously embarrassingly weak… but I still wrangled couches and beds and dollys and dressers with the best of them. So now my entire body hurts all over.

Oh and we were driving all over the DC Metropolitan region to do this, so “lunch” was consumed at 3:30.

Then today being the good obliging daughter and niece I am I woke up and drove my mom and aunt to the airport. Jet Blue now demands that you arrive two hours early for flights. Their flight was at 9 am at Dulles. Thus, I was pullin’ out of the driveway at 6:30.

Homemade breakfast was not happening. Thus, this. 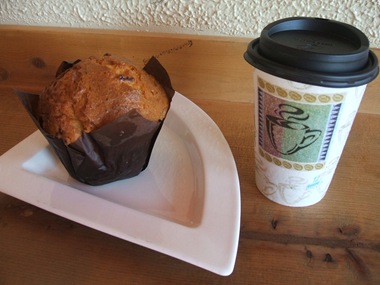 Along with the elixir of the gods (coffee), I decided to have some kind of indulgent purchased breakfast to drag me through the day, and used the time between 7:45 and 9 (it took me awhile to get back from Dulles due to my gas light going on OOPS. And then navigating the labyrinth of streets but- let the record state- Dulles airport has mystifyingly cheap gas. Not even cheap for an airport. Cheap! Crazy cheap!) to read my paper and nibble and get myself chilled.

This was a nice cozy setting for it. 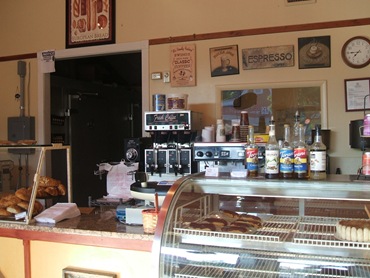 I Yelp’d my new office and up popped Baguette Republic, which is now apparently called Bread House, Inc. (a much less cute name) but otherwise seems to be exactly the same. Inside was vair cute, and there was a very nice guy at the counter who gave me free coffee because it was my first time there and greeted customers by name.

So let’s zoom in on this muffin. 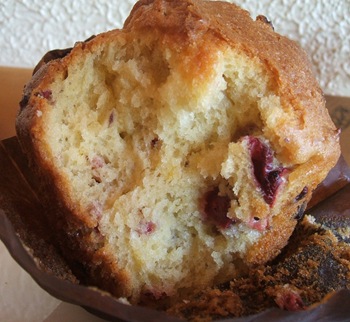 Allegedly morning glory with carrot and all that goodness. Um… it was delicious, but wholesome it was not. I didn’t see any carrots except for some faint specks which I honestly think were orange zest. The fresh cranberries were rockin’, but mostly it was just SWEET. But I do want to go back, because they had beautiful fresh baguettes and things. And bakeries are lovely. Just not necessarily to be relied upon for long term sustenance.

Last night after all the heavy lifting I got home and praise all that is holy my mother had the week off and she cooked and it was glorious. She made baked tofu bites and Bobby Flay’s brown rice salad with citrus-basil vinaigrette. Didn’t get a picture then, but conveniently had the EXACT SAME THING as leftovers for an easily prepared work lunch. And in natural light no less! 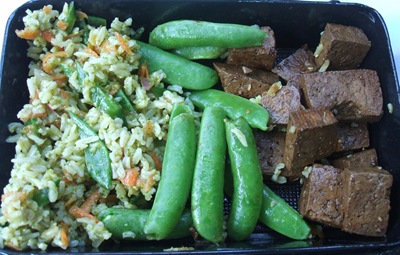 Both recipes are seriously bossy. The tofu is intensely rich and flavorful and meaty, and the salad is light and refreshing and delicious. The salad did contain some slivered sugar snap peas but I love them so that I had some straight up for dessert!

Tonight I had endured less manual labor but was no less exhausted, so I reheated some of the other week’s pea soup which I prudently froze in individual servings. Then, as last night, I was ravenously hungry, and ate many many many other things.

Baguette Republic is SO much cuter - love that name!!

The tofu and rice do look "bossy" :D I haven't had rice for the past week because we kind of OD'd on it in Japan, but this may be the first dish to break that fast....

Tofu bites, get in my belly! Bookmarking that recipe!

lovin the use of the term, 'bossy', haha.

hope you have a great day
xo bec

That rice looks good. Must check out that recipe. That stinks about the internship. Hope it gets better.

Ah, the life of an intern at a not-for-profit. Sometimes I wonder what everyone else is doing that I had to take care of such strange tasks. Hey, at least you got a good workout haha.

Ooooh I love sugar snap peas. Must get some asap.

Oh that muffin looks like just my type, yum!

Sorry you are busy doing everything under the sun. I think we have all been there at some point. The tofu dish looks great.