giving someone else the work

Dinner last night was so beautiful and classy and springtimey.

So we had finally used up all the fennel bulb, but there remained the fennel branches. Not one to waste food ever, last time this occured I hit up The Google and discovered fennel branches made an excellent base for fish cookery. I made fennel grilled salmon with great success, but it was not grilling weather, and the only fish we had on hand was cod.

So  I used one of my favorite lazy-yet-classy-looking techniques: fish en papillote- the parchment paper is a magical moistening machine. I get really anxious about drying out fish when grilling/broiling it, so I was stoked to have the parchment do the work for me. 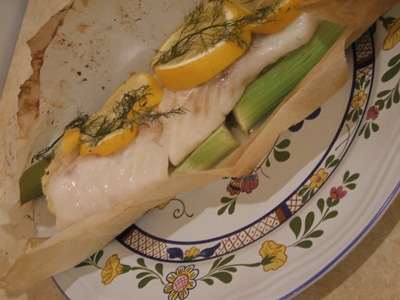 I started with a long thinish cod fillet (3/4 to one pound probably?). I got a big piece of parchment paper and layered the fennel branches, the fish, salt and pepper, lemon slices, and a few fennel fronds (mostly for garnish, this being a food blog and all).

You seal up the parchment paper like an envelope (though honestly mine kind of broke open and was far from airtight- it doesn’t really matter) and I baked mine at 500* for 12 minutes (that seemed really hot but I consulted an epicurious recipe).

My side dish I knew ahead of time was going to be a mere vehicle for the abundance of beautiful green herbs I had. 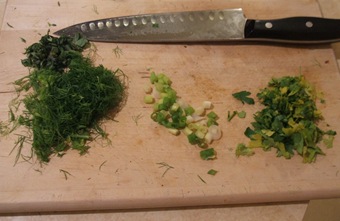 I cooked up some barley (I used regular, not pearl, barley, and toasted it first- from that time I made barley-sweet-potato hash I knew that gave barley rockin’ flavor. Then I added water- 1 and 1/4 cup for 1/2 a cup of barley- brought to a boil, covered, and simmered on low for 40 minutes or so). Then I threw in, from upper left to right, the last of my mint, some fennel fronds, a green onion, and a buncha parsley. I finished it off with a sprinkling of lemon juice. 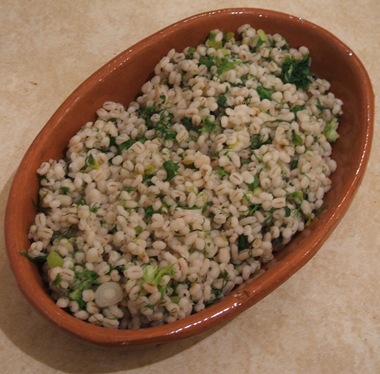 So yummy! Barley is such an underrated grain; it’s one of my favorite things to cook with.

A salad, to accompany: 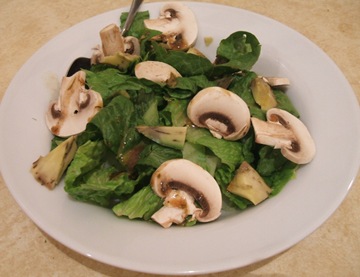 Romaine, mushrooms, and the wee green bit of an avocado that had gone brown and gross, *sob*! Oh my God wasted avocado is a crime. 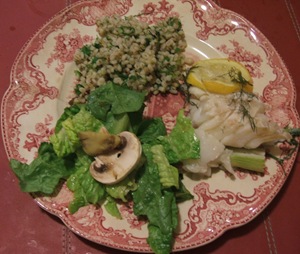 Today’s lunch, a variation on fauxlafel, looks all right but was kind of a mess. 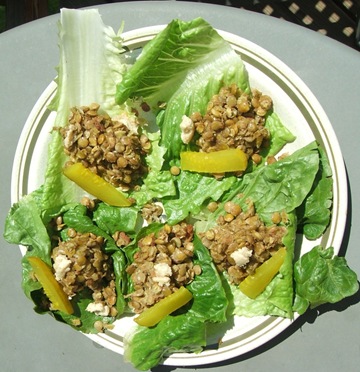 I was attempting, again, to let someone else (well, a crockpot) cook for me because I wanted to take a bath but wanted the lentils to be cooked when I was done.

Just… don’t do that. Make the original recipe (in Favorite Recipes). It just didn’t work. But I did like the idea of fauxlafel in a lettuce wrap. With pickles, obvi.

I made a tahini sauce with just tahini and lemon juice… is it just me, or does tahini thicken when you mix it with even thin liquids? It’s so odd- tahini is sort of like runny peanut butter, but I mixed it with lemon juice (even runnier) and it got THICKER and was like thick peanut butter. Strange! But tasty :D 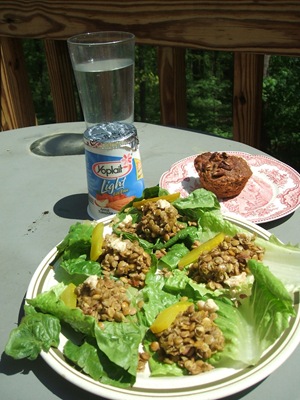 A glass o’ water, the last fiber-diculous muffin, a yogurt (the apple turnover Yoplait is way too delicious for its own good) and sunshine!

For dinner, my mama cooked! Well, I thawed what my mama cooked. When I left for Asia, I was all “*panic panic* We have buttermilk in the fridge! Don’t let it go bad! Use it!” So she made pumpkin vichysoisse, a deliiiiiiicious smoky and spicy pumpkin-leek soup. She froze most of it so I could try some when I returned, but then it was Lent (and the soup has chicken stock). Tonight, in a rush to get out the door to choir practice, it was perfect to have it ready made! 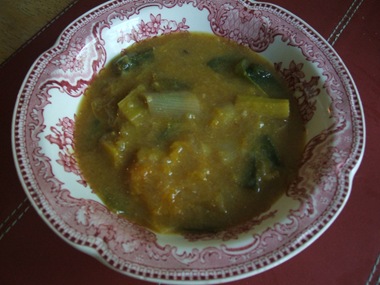 I love to cook but it's become a tad bit of a curse because I’m so competitive and perfectionist (in general and also about food). But I should let other people cook! My mom makes really awesome delicious food! She’s the first person to teach me how to cook!

We also had, also homemade and delicious, bread. My aunt made two loaves of bread for Easter and since we were already busting at the seams with bread we froze some of the leftover and have been gradually thawing it. 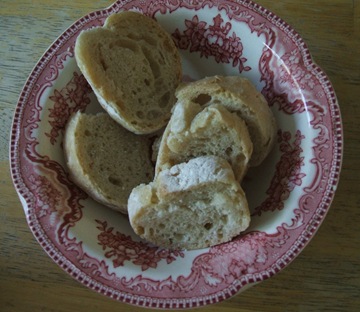 Finally, for a little protein, we have roasted almonds. 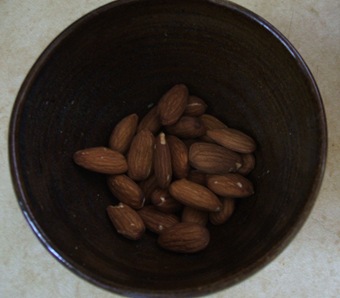 I have been eating this crazy amounts and am amazed this is the first time I am posting about it. 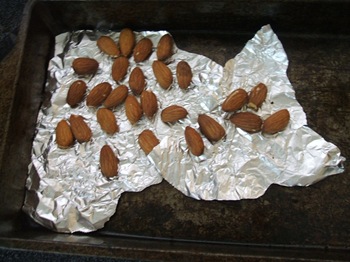 So simple, so delicious. Just take a foil-lined baking sheet (yes, hippie that I am, I reuse foil) and put on almonds. Roast at 350. That’s it.

I don’t want to say roast x number of minutes because there are just too many variables- I keep my almonds (a big Costco bag) in the freezer, I use my amazing convenient energy-efficient countertop oven which runs a little fast. It’s somewhere in the family of 5 minutes, but I monitor them basically the whole time- they’re done when they’re barely browned and wonderfully aromatic. Don’t leave them alone!

The fish looks yummy - I just love fennel! I also agree tahini is difficult and has such a strange consistency - I try to stay away. Thanks for sharing your experiences!

I love roasting my own almonds! The best snack =)

I reuse foil AND parchment paper! I'll use parchment paper to line the pan when I bake cookies for Sweetie, then brush off any crumbs and quietly stash it back in the drawer. The next day I sneak into the kitchen and make granola or his dinner rolls or whatever on the same paper. Earth-saving? Yes. Sanitary? Probably not.

Thanks for posting the fish recipe! I've been DYING to try fish cooked in parchment paper!!!

Have a great weekend! <3 xoxox

I love roasting almonds at home, lightly salted. Cod is super popular around here. But if not prepared correctly, it can be so yucky.

That is a really realy pretty dinner lady. Way to go!!