another börek in the wall

Yes I’m a nerd. Wait til you see the title I have planned for Thursday’s dinner (yes, I plan meals- and blog post titles- days in advance). 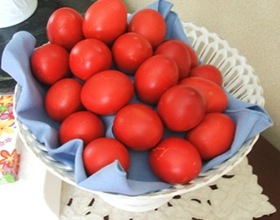 Due to my mother’s pathological fear of anyone leaving her house hungry (it seems to be ingrained in the Greeks- if the table isn’t threatening to collapse, something is wrong) we currently have 15 hardboiled eggs. We did have 18, but my mama’s been having them for breakfast and my bestie had one when she stopped by yesterday (thank God she’s not a vegan anymore).

I hit up The Google to find some things to do with them. I definitely want to make soy sauce eggs like the ones I ate and loved in Taiwan, and it’s rare that a currylicious Madhur Jaffrey recipe is not delicious. Does anyone have any interesting recipes for eggs that are already hardboiled?

But anyway for last night’s dinner I got more and more interested in Böreks, particularly the Israeli variation, for which I had (ish) the ingredients. 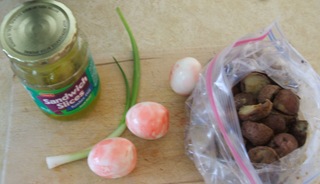 Yes, the eggs are reddish. It is safe vegetable dye! It does, however, get your hands, too. Out damn spot. 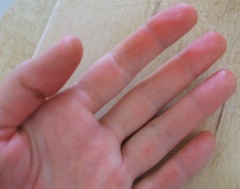 Wannabe Borek (I should really have an I-Wish-I-Were-Middle-Eastern party. I could serve faux-lafel too!)

Microwave potatoes with 1 tsp. water for two minutes or until soft and warm. Mash. Dice eggs and green onion. Combine. 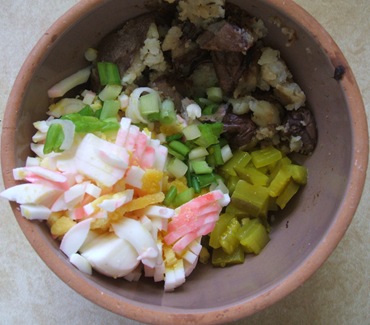 Its appearance after stirring is pretty darn gross! That’s why you stuff it in phyllo! 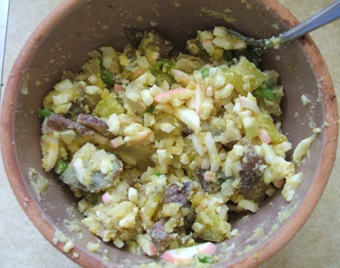 I rolled them in a variety of shapes, ranging in attractiveness to least (triangles where I tried to skimp on the phyllo and they ended up falling apart) to most: 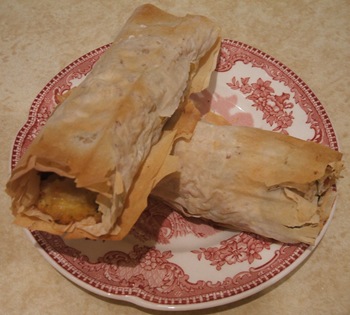 When they’re rolled like that apparently they’re called “cigarette” briks.

Probably when I took that picture, after baking at 375* for 30 minutes, they were.

But then even though I knew she was working late (taxpayers, you are getting your money’s worth from my mom’s government salary- she worked til almost 9 last night!) I decided to wait for my mom to get home because I ate dinner alone almost every night my last two years of college and I kind of hate it. So they sat in my countertop oven on “warm” for like… an hour. So they ended up overcooked and grody.

Perhaps I’ll make them again and cook them the PROPER length of time.

And yeah, obviously I’ve been eating a squajillion other leftovers, but you don’t need to see the same piece of spinach pie over and over (mmm, Kathy it just keeps getting better!), so I’ll stick to just posting leftovers if I do creative rearranging of ingredients like seen above.

For example, what is that hummusy looking thing? 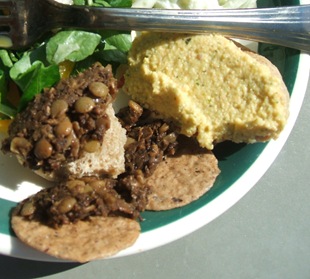 It in fact used to be this! 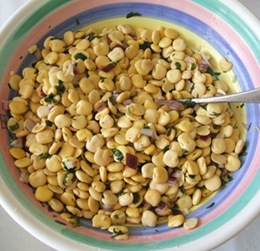 I just continued to not be incredibly happy with the lupini bean salad- it was still too bitter. I decided pureeing it would allow me to tweak the ingredients. Plus, yknow, I love hummus.

So I threw the salad, onions, mint, dressing, and all in my food processor. To puree it I added water (thinning), parsley (freshening), but what I really wanted was to counteract the bitter- thus, sweetening. I decided to add orange juice concentrate and carrots, diced and microwave-steamed for two minutes. 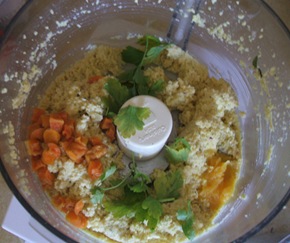 Much better! Atop some bread, along with olive-lentil dip (also just keeps getting better) and more fennel-watercress-orange salad. Mmm mm mm. 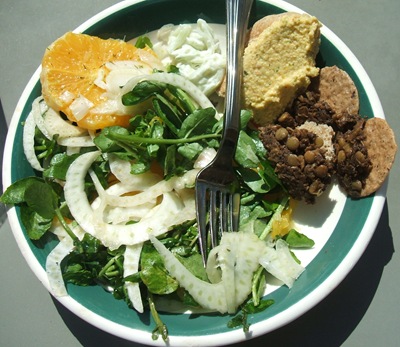 And we’re up to today! Lunch featured an unreal sandwich. 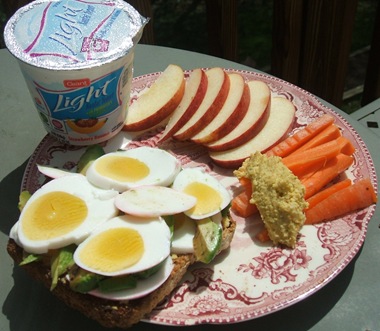 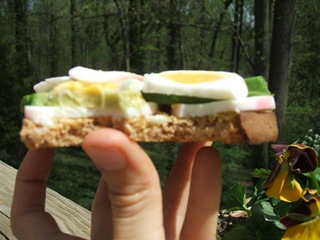 Rounded out with carrots and more hummus, the remains of a grapefruit-sized apple from breakfast, and yogurt (yes, we have scads of food in our house but I actually gave in and made a grocery store run today. In my defense, we needed toilet paper, but I also just cannot go that long without yogurt. It is just necessary!) 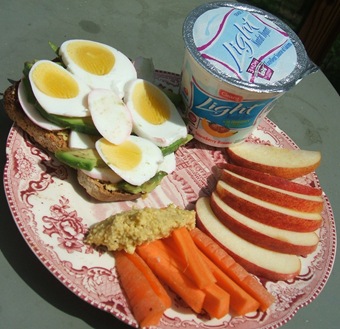 Finally, I have had THE most happy, passionate post-Lent reunion.

Technically Orthodox Christians are supposed to become strict vegans for Lent- no dairy, either! However, I worry too much about calcium intake (yes, I know vegans can get enough calcium, but it was a challenge for me and I’m ambivalent about soy) so instead I cut out “fun dairy”- dairy I don’t eat for calcium intake but rather because I love its delicious deliciousness. The ultimate? Ice cream.

Back in my life- Breyer’s All Natural (the only ice cream worth buying) Coffee. In my Taiwan good-luck fish bowl! 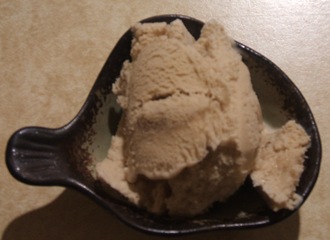 Love the title! Greeks sound a lot like Jews- my mom makes food for an army (and to date we have never had an army come to dine at our house.)

By the way, the comment above was mine. Do t know why it came out anonymously!

squajillion...love the new word. filipinos are like that with always making sure people take food with them. family gatherings were always a monstorous event and the weeks to come after were focused ont rying to put a dent in our leftovers.

your creativity with left overs is pretty impressive...

I love hard boiled eggs with tahini sauce--Google it (I believe it's tahini mixed with yogurt and lemon juice). That thus alfalfa sprouts plus greens plus red onion, in a wrap. Go to town on it.

i love your snack plates!!! sooo good! my fav way to eat!

Snack plates are the bomb.com!!

I LOVE those leftovers!
<3 jess
xoxo

Love those red eggs - veeery dramatic & cool! I am such a fan of the leftover as well - I applaud your creativity! Thanks for sharing.

Bahahaha. I hear you on the fear of starvation. I don't know what it is about food! I get pounced on whenever I go to a big get together:

*giggling*
Your eats look great! I was going to suggest my favorite way to eat HB eggs: in a salad with avocado and kale! I take the yolks out, though, mostly. I find them too strong-tasting.