I am writing this in my FUTURE HOME, North Carolina. More specifically, the Triangle (Raleigh/Durham/Chapel Hill). More ideally (if things go my way), I’m in a super cool coffee shop in Carrboro, the cutest. town. on. Earth. Reminds me a lot of Austin with the bikes and the local food and the music venues and the gazillions of cooperatives.

Toured my FUTURE SCHOOL (in an ideal world, of course; caveat must be stated that it is the school at which I have not yet been accepted; but cmon, I just beautifully executed that clause with a beautiful preposition in the middle, not the end. They’d be fools not to accept me). Well not toured in the official sense; toured in the wander around campus looking at all the pretty buildings and pretty trees thinking how nice it was, then toured the general neighborhood admiring all the cute cafes at which I wanted to dine someday.

Hung out with my ONCE AND FUTURE FRIEND Andrea, with whom I attended summer camp at Duke University back when we were dramatical teens. We spent a cumulative six weeks together in high school but our friendship is legit. We’re excited we’ll be living in the same place!

Basically, my life is in a good place. Certainly I have more than my share of nerves about all the changes I foresee in the next few months, but I’m excited for what’s coming next.

Also, my brain has gotten happier and I think it may have something to do with these: 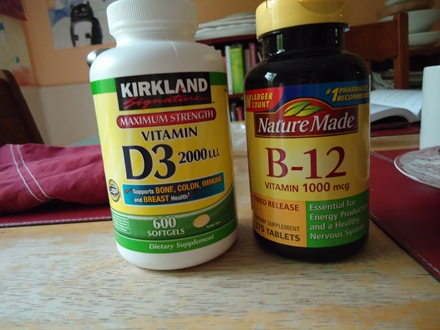 Went to a new doctor where I was immediately stripped nekkid for an EKG (which was jarring but confirmed my heart is in good health) and also tested for scads of vitamin deficiencies. Lo and behold, I was lacking in Vitamin B12 and Vitamin D, both of which are associated with general mental… goodness. Or rather, both of which when lacking can produce mental… badness. Not gonna lie, between allergy meds and hormone things and so on, with these supplements I am now up to taking FIVE PILLS A DAY. Which seems extreme for someone ostensibly “healthy”. And yet, I appreciate that I can just swallow two little things and enhance my well-being in different ways.

And now for some of the randomness you have all grown to crave from my blog. 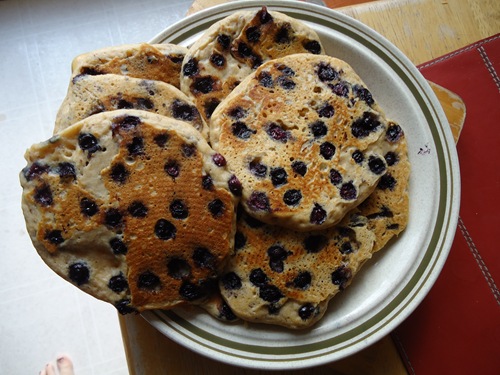 Pickles! We got scrumptious Persian cucumbers at the farmer’s market (er, that’s an oxymoron. Persian-style, I spose I should say). They’re great, but you do have to watch them because like any cucumber they go a little soft.

So…. I just pickled ‘em! A not at all scientific mixture of soy sauce, rice vinegar, chili garlic paste, salt, sugar. 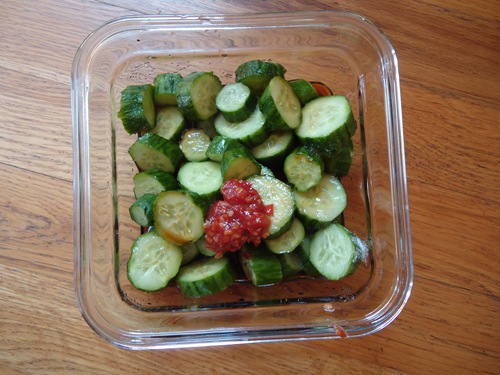 And served them with the most amazing faux-gado-gado. (Say it out loud. You know you want to). This was sort of a healthier, hippie-er gado gado. 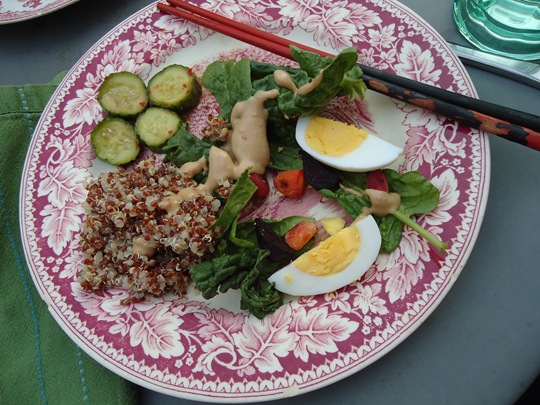 Basically, it was vegetables as a peanut sauce vehicle, actually.

Well and ACTUALLY the peanut sauce was sunflower seed sauce.

Enough new paragraphs, this is just a disjointed recollection now. Whatever.

I made some quinoa to mix with the gado gado, cause I’d gotten new red quinoa and that seemed as good a reason as any. I hardboiled eggs, which I consider the essential element of gado gado. I roasted some random vegetables we had around the house. Roasted vegetables are not authentic to gado gado; I simply prefer my carrots and beets roasted. I put some spinach on a plate, followed by the veggies and egg. Then I made my “peanut” sauce- I used sunflower seed butter because I’ve grown to find it too sweet on its own and I thought it’d be niced mixed with other things in a sauce which, SPOILER ALERT, it was. Sunflower seed butter, coconut milk, soy sauce, rice vinegar, and chili-garlic paste.

Dude, it was so good I ate it with a spoon the next day. 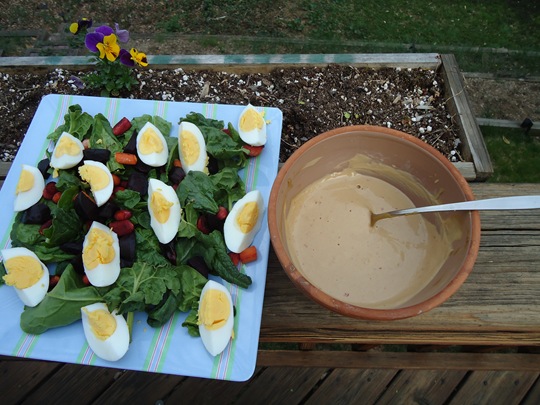 But this all together is a nice well-rounded meal, nutritionally and flavor-ally (especially with the pickles!) and texturally. 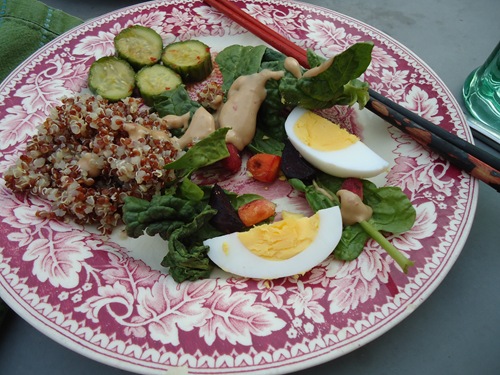 I blended up part of a baked sweet potato, some flaxseeds, some walnuts, some oats and a little olive oil in a food processor. Couldn’t tell you the quantities but I’ll definitely make it again and get a solid recipe because HOT DAMN THIS WAS GOOD. 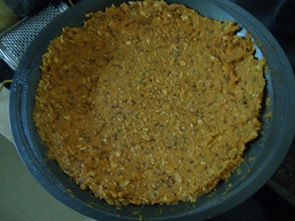 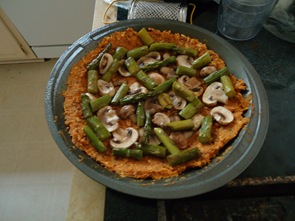 With ‘sparagus and ‘shrooms atop, and then a haphazard amount of beaten up eggs and cheese atop that.

I never follow recipes with quiches, which becomes a problem when I overcook them and get gross rubbery eggs. I did it just right this time; cooked it at a nice low 300 and pulled it out when the middle was JUST set. So the egg department was good and the crust department was GREAT! I prebaked it a bit before adding the eggs. For… awhile (this is so obnoxious of me, talking about a great thing I made and making no effort whatsoever to make it reproducible). And when the crust came out of the oven it was just so great and sweet and rich and chewy. Not like typical crust but… awesome. Unique. 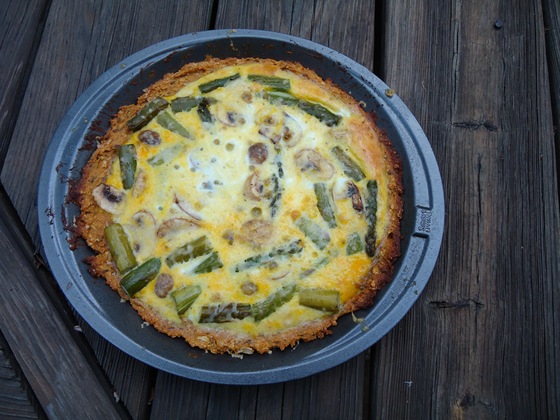 A final fun thing was dog sitting! I have lately been harboring (unwise) fantasies of getting a dog. And lucky me, I got to borrow one, and it was an exceptionally nice one, AND I was paid RIDICULOUSLY GENEROUSLY for the privilege AND got to use a really boss grill. 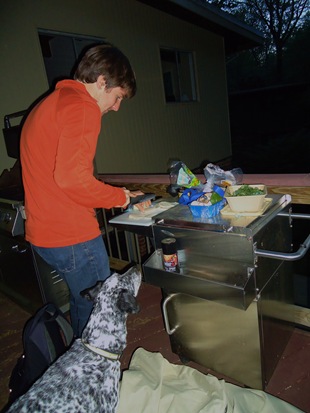 Annnnnd then things got a little messy with the grill. And we decided the pizza already had some beautiful char so we’d move operations inside. Where, as an added bonus, there was better (er, any) light. 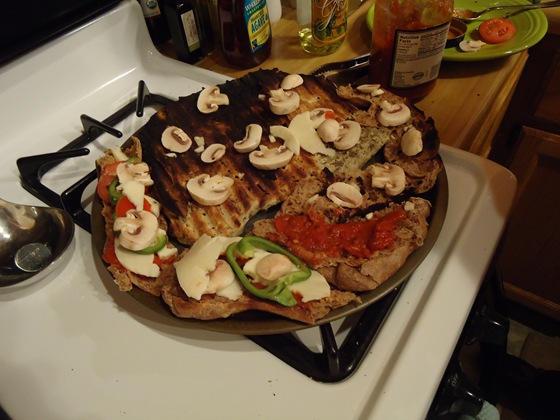 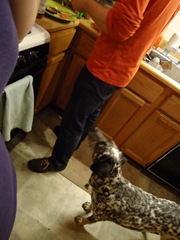 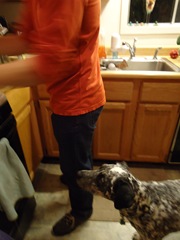 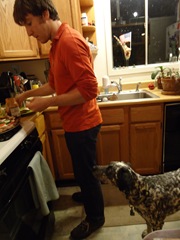 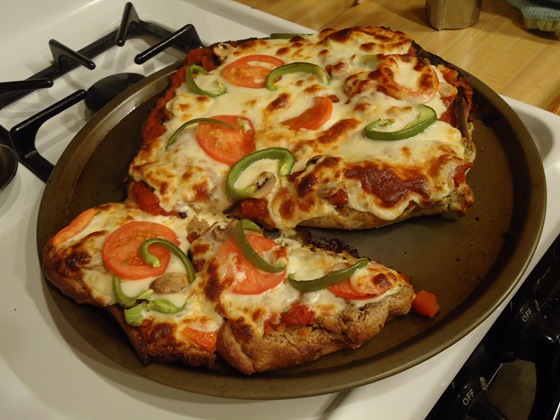 And served with a hastily thrown together Whole Foods salad bar salad I only bothered to photograph outside. 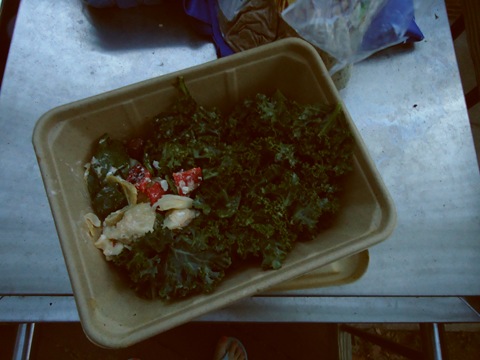 I’ll have more to write about various life things later, but let me sum up in saying that the portrayal of your twenties in the mass media is RUBBISH. Sure, maybe you’re young and good looking, but WOW it is a DIFFICULT time. Particularly during the Great Recession.

In my chemistry class, which is filled with tiny little 18-year-olds, one of them was saying how she wanted to get married when she was 21, and my 37 year old classmate and I said NOOOOOO. Not to belittle anyone who got married young, of course. Just, as I put it to her, you have to give yourself the time and space in your twenties to go a little crazy. No, I’m not talking about boozing face or snorting coke necessarily (I mean, sure some people do but I certainly didn’t). I’m just talking about all the cognitive… messiness that comes with your twenties.

I’m not all the way on the other end of it, but I’m feeling retrospective about certain forms of my twenties craziness, which is a relief. And I’m excited for the next phase!

I'm sure you'll be accepted! I'm jealous you're applying there! :) As I mentioned before, I was considering applying to their Maternal Health program but I've since decided to take a serious plunge and apply to a Master's in Nurse-Midwifery program. Eep!

HEY! We just opened our brand new HD Radio Station in Woodbridge, Virginia. If you are interested in creating a station with us based on your blog, give us a call!! We’d love to work with you! Royal Crown Studios: 703-490-9028