Below, a tale of authentic and not-so-authentic ethnic cuisine experiments.

First, a trip to Lighthouse Tofu. That place is so great. I’ve blogged it many times, but always feel compelled to yet again on each visit, because the experience is such a delight. Mostly-Korean clientele (being in an ethnic minority in a restaurant for me tends to indicate that I’m about to eat really good food), Korean writing on the walls, cute silly bows on the windows. 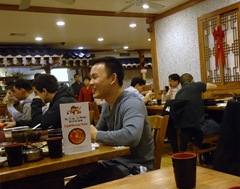 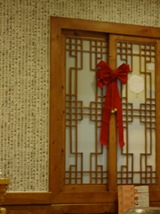 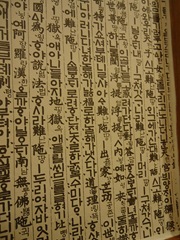 I went to Lighthouse Tofu with my sister (er, so this was like two months ago, when she was still home on break) and my best friend, who was preparing for her move to Western Massachusetts by eating all of the delicious ethnic cuisine our multicultural area has to offer.

Like always, the menu was small and we all got the soon dubu, tofu stew of awesomeness.

But first, the parade of delights. 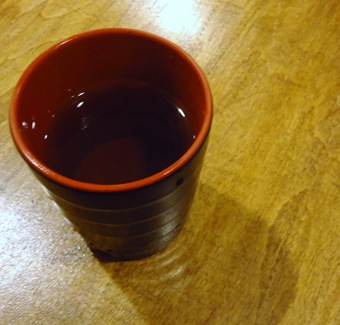 This soup stuff, like… tangy liquid salad. I think it’s a kimchi variation. It has crunchy, incredibly fresh tasting cabbage and an acidic and fabulous broth. 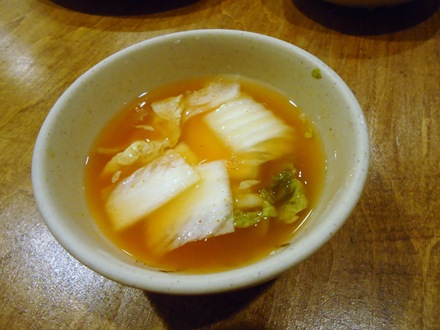 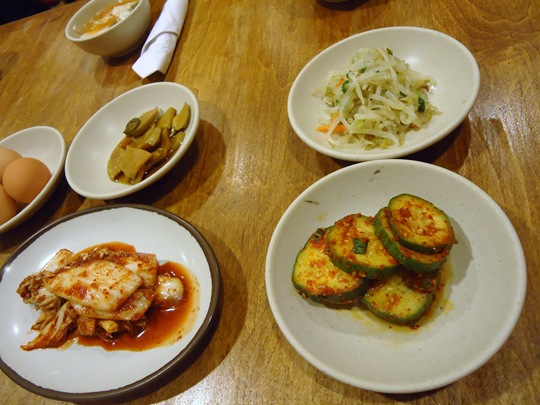 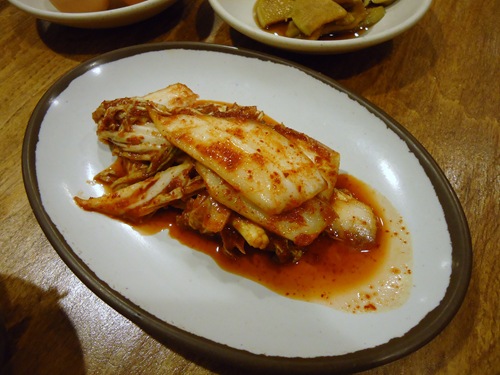 Cucumbers- though that sauce looks chili-y it isn’t at all hot. It’s got a spice I try and fail to identify but it skews slightly sweet. 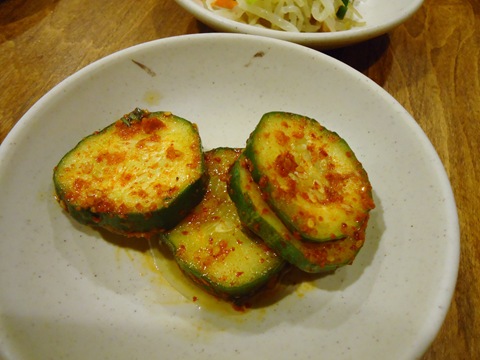 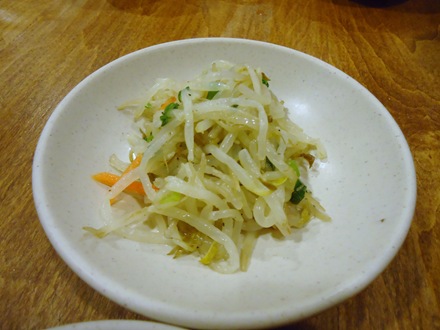 And oh so delicious MYSTERY PICKLE. Does anyone know what this is? I LOVE IT. 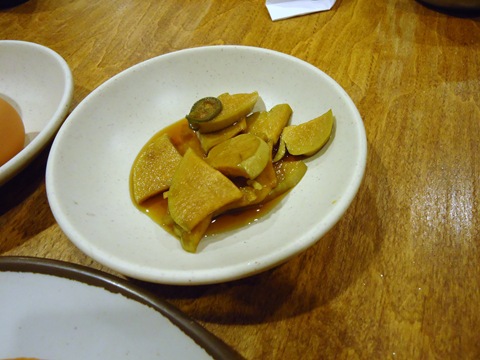 Then it’s stew time! The arrival of the stews is an extremely exciting event. Everyone gets their own individual, screamin’ hot tureen. You grab a raw egg and crack it in while your dish is still bubbling, cooking the egg. 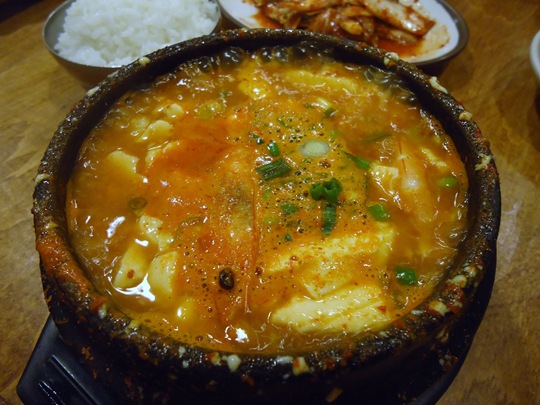 If you do it right, after a few minutes, you can pull out an intact yolk. Mmm. 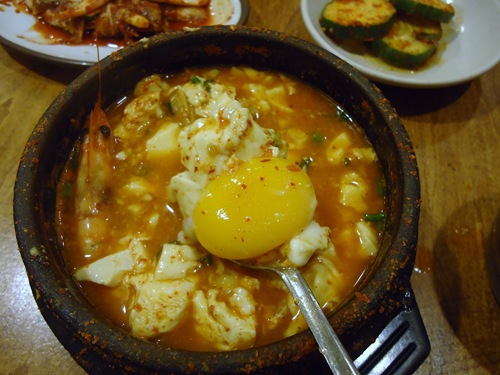 (apologies, vegetarians, for that shrimp face)

All of the stews come with a wonderfully flavorful broth and the most perfect soft, silken tofu. I ordered the seafood variation, which had shrimp (heads on! vair flavorful), mussels and the like. I opted for the “spicy”, rather than the “spicy spicy”, since I didn’t need to cry that day :)

You’re given white rice on which to ladle your stew (which I recommend even with just one “spicy”; it’s nice to have something to cut that hotness!). The rest of the rice stays in a communal hot pot, getting a little toasty on the bottom and steeping with s’more of the barley tea to make a post-meal beverage that’s the perfect end to the meal. 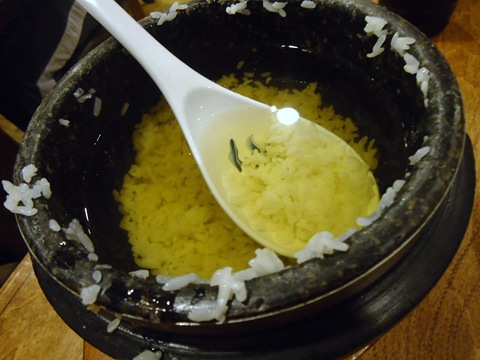 And now for something completely different!

I lost a bet with Steve and generally our bet terms involve food. So I made a meal for Steve of the cuisine of his choosing- Thai!

It ended up being kind of a soup-a-thon, which is definitely my favorite kind of –a-thon.

First, a pretty tasty vegetarian tom kha. I loved using real lemongrass- I actually had a lemongrass paste that had been in my freezer Lord knows how long… and it worked! 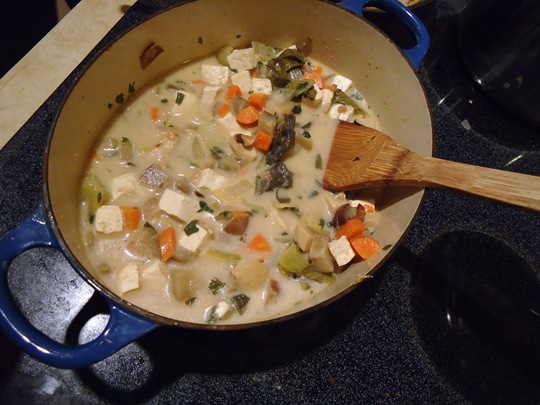 Also, since we’re all friends here, I’ll tell you I added extra coconut milk. Is anyone surprised? Also added one of my favorite H-Mart purchases, oyster mushrooms. Those things are incredible- such depth of flavor. Real meaty-like. 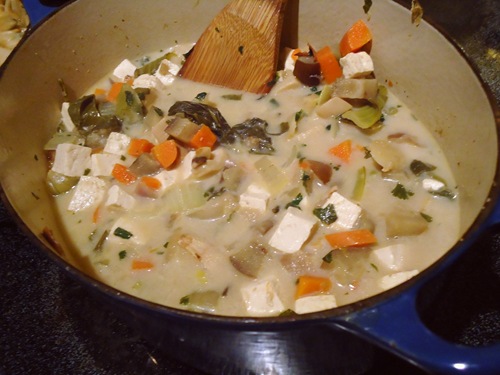 The next soup was GREAT! Inventive, whacky combination of ingredients (mango nectar plus peanut butter, anyone?). I recommend it just if you’re interested in trying something new: Thai style pumpkin soup. I used kabocha squash and just baked it up and scraped it out and added it midway through cooking. Worked great. 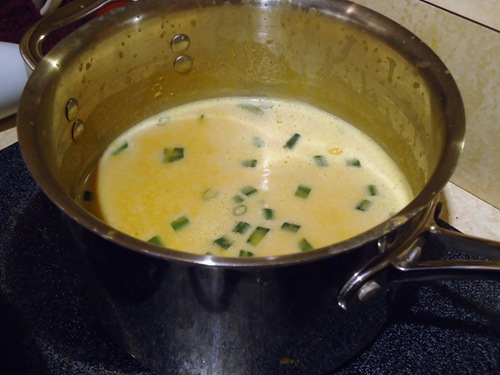 And finally, duh, this is Thai cooking, pad thai! I used this Cooking Light recipe as a jumping-off point and then we made some adaptations based on what we like (bean sprouts instead of cabbage, etc). I’m going to be honest that even though Steve won this bet and I was supposed to be his slave, he did the vast majority of the work on this :) 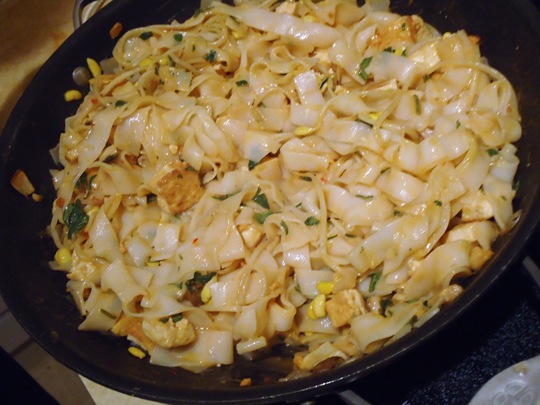 Just look at those strong arms! 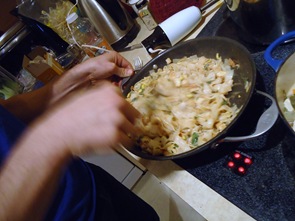 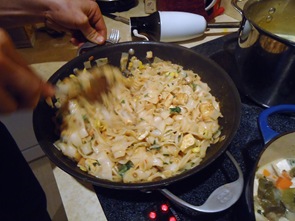 And so a feast was laid. 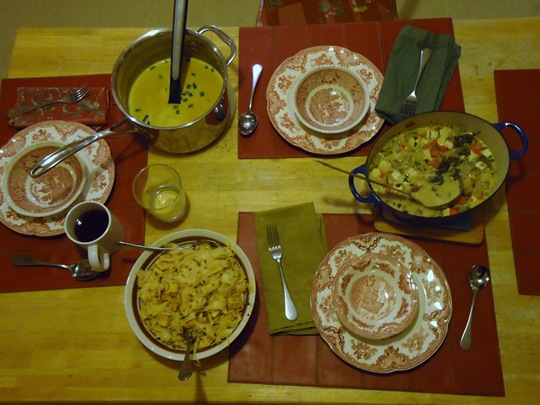 It’s not quite the experience I had in sunny Thailand… no elephant riding or anything. Still, for a bunch of American cooks, it was pretty impressive, and VERY tasty.

If you were to somehow come down with a fit of Alzheimer’s and forget that we had this Thai cooking experience it would fine. Or if you somehow started to go into self-reflection mode and were like, “hey I wonder if my Thai cooking skills have started to slack since I haven’t cooked Thai in easily a month and a half?” you could totally redo this experience. I wouldn’t mind at all.

Ileana, all the fried rice I’ve been eating has wiped my memory clean of the wondrous taste of tom kha and pad thai. I think it’s only fair that we appease my memory in honor of the people of Thailand and go for a round two. OHHH MY GOD, PLEASE MORE THAI FOOD!