Carolina and other good things

I would have entitled this post “Going to Carolina”, but to know me, to truly know me, is to know of my devout and eternal hatred of James Taylor. Truth.

Anyway, I used to go to summer camp at Duke- to be specific, summer WRITING camp, because I was a huge nerd. Though, all my teachers there were so encouraging, and it does make me wistful how little of it I do now. I guess this blog counts? Er…

Anyway, Duke is so gorgeous. 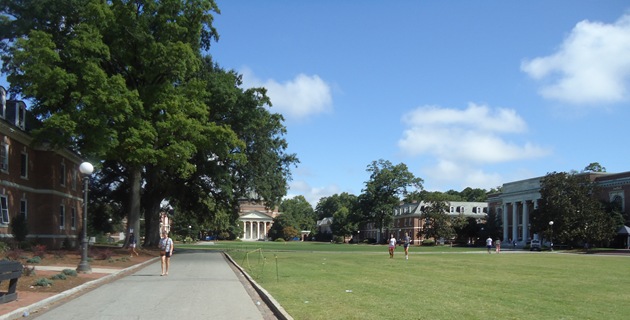 I’ll get to our main purpose for being in NC at the end of this post, but an added bonus to the trip is that my mom made a visit to someone she’s worked with who works at Duke, and we got a fabulous tour. 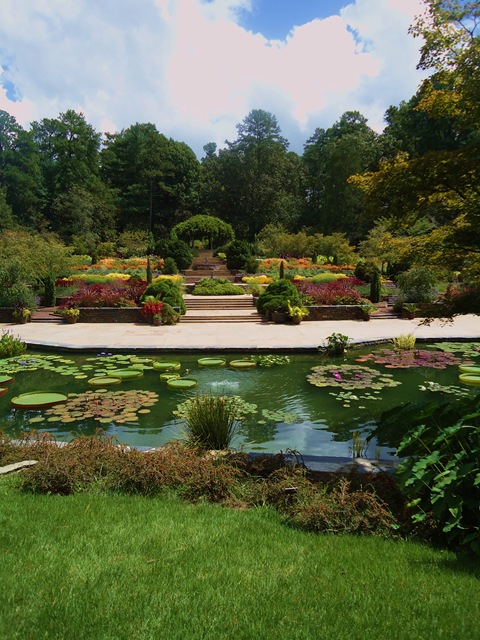 Also took a peek at the academia side with a look at the Global Health department. But by far, by far the best part of that trip was: 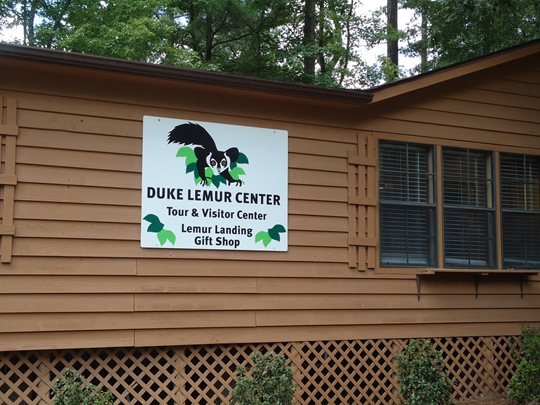 LEMURS I LOVE YOU SO MUCH!

Everything about Duke Lemur Center is amazing. The fact that not only is it a wonderful sanctuary for animals, it’s also where first-class research is taking place. When we were there, a graduate student was just finishing something that involved lemurs typing things on computers. I love our smart fellow primates.

They meditate and think deep thoughts… 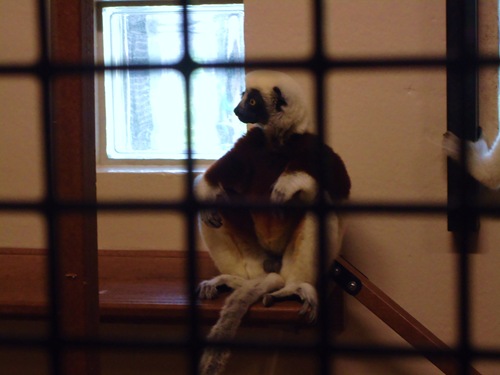 … they keep an eye on their guests. 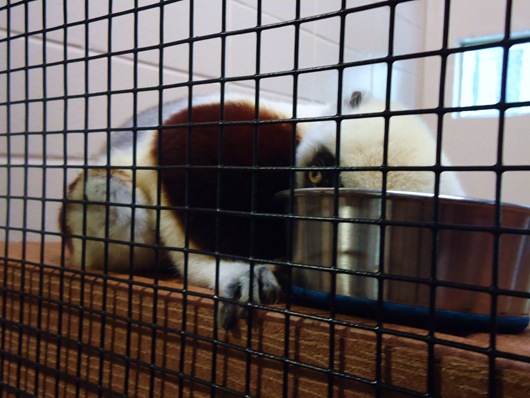 Apparently the cute innocent looking ones (these are brown lemurs) can be the most vicious. 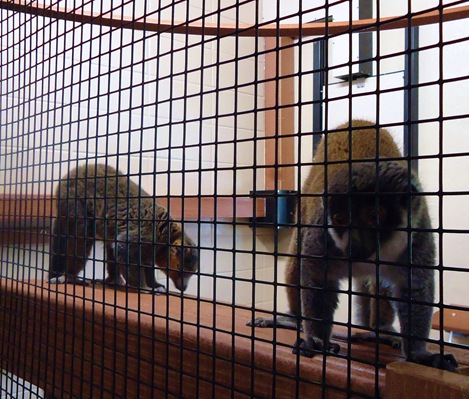 MEGA inspiring, and I think excellent fodder for a children’s book: the (poorly photographed, sorry) lemur on the left is the mother of those triplets there with her. She was born with a disabled left arm (they think it may have been because her mother was on antibiotics before they knew she was pregnant). Initially it seemed to get in her way- rather than being able to leap from branch to branch,  she would climb one tree, climb down, climb up the next tree, climb down- but slowly, she seemed to get sick of that. One day, she just started jumping. Not only did she do great, the keepers at the center said that she jumped further and riskier jumps than any of the other lemurs would dare. Plus, she’s been a very successful mother, and is parent to more lemurs at the center than anyone else. SO inspiring. 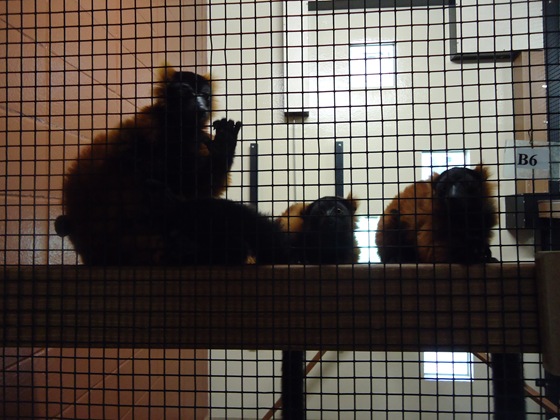 As you can see, the lemurs have large and spacious enclosures on the inside… 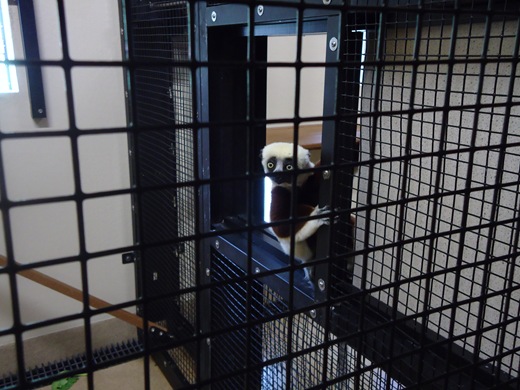 But they can also go out whenever they want! (Can’t you picture that one saying, “C’mon guys!”?) 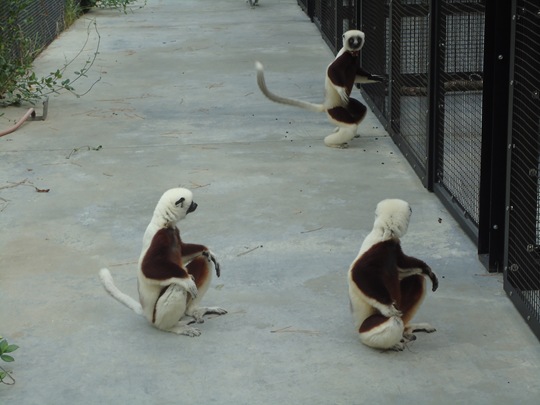 (Sidebar: the lemurs in that picture are also known as “dancing lemurs”. Their bodies are designed to spring from tree to tree, and they move like they’ve got pogo sticks in their feet. It’s so extraordinary, especially when they come over to investigate you, which they do a lot because they’re so INTELLIGENT and CURIOUS and AWESOME!) 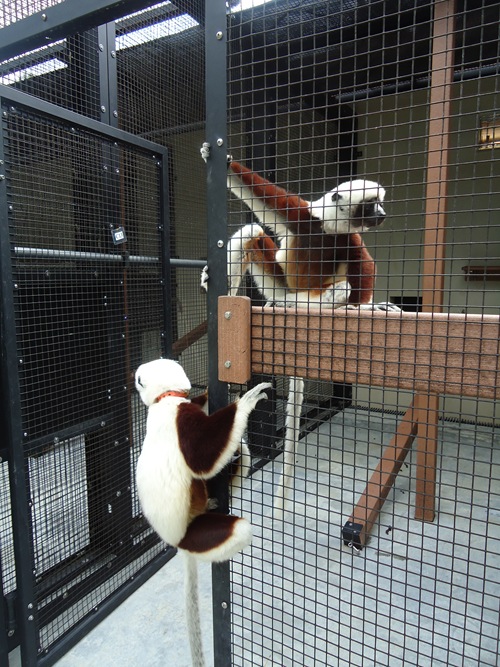 So when I say outside, I mean outside. People who come to visit the lemurs literally have nothing between them and the animals. To me, it’s fantastic- here’s a chance for school groups and other visitors to come in and see how the animals behave. 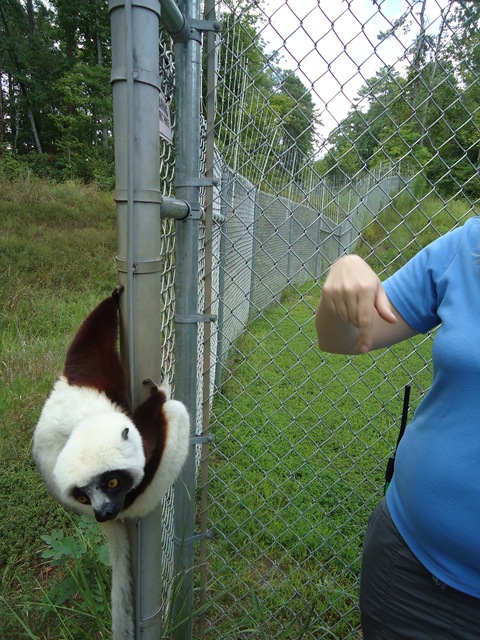 Best of all, the animals get to go out into the Duke forest and do what lemurs do! 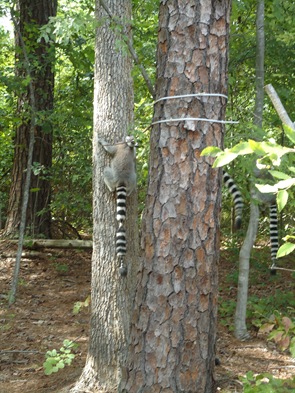 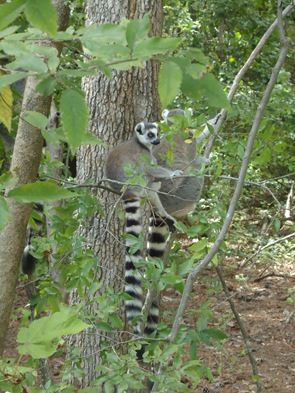 Funny story: There was a ditch separating the building and the surrounding forest. Initially the lemurs were suspicious and refused to go through the ditch. So the facility built a bridge. Then the beams would get too hot sitting in the sun. So they built a roof. 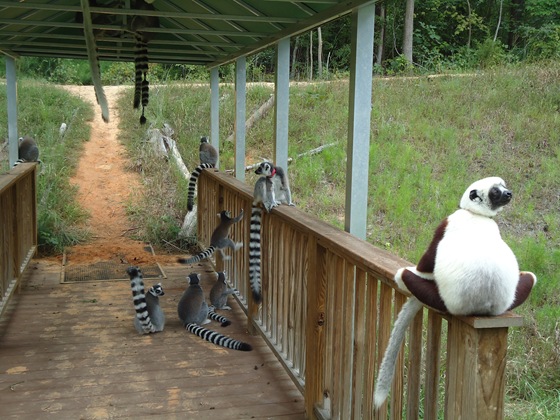 Also, don’t you wish your neck could do that?

Hilarious ring-tailed lemur story: two adolescent males were getting shunned by the rest of the lemur troupe (because, like sensible societies, the lemurs are female-dominated). One Saturday night (of course) they managed to hop the fence and escape the center. Everyone was distraught: there were predators like foxes in the woods who could get them, they could get hit by a car. Monday morning there was a sighting of them (someone was commuting to work and saw lemurs cross the road; could you imagine?!), but every time someone called, by the time the staff got there, the lemurs were gone.

But, at a Christian school a few miles away, the children had been on a field trip to the lemur center, so a child looked out the window and said “There’s a lemur on the playground!” The teacher hadn’t been on the field trip, so she needed some convincing, but after she saw the lemurs, the kids explained that they knew the staff at the center would play drums and music when they would feed the lemurs, and the lemurs would come. So the students made a path of food leading into the school’s library, and banged drums. The lemurs came in and the students were able to shut them in the library. When the staff from the center arrived, the students were taking their Spanish lesson with the lemurs.

Isn’t that a great story? It goes to show you, when you teach people to care about their fellow creatures and understand them, they’ll help look out for them. 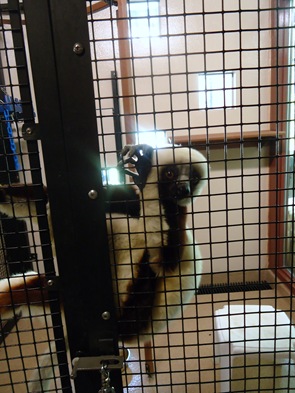 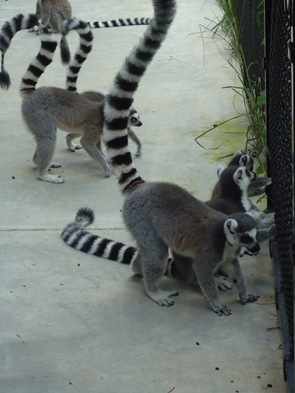 That evening, my mom and I strolled to downtown Durham, where we enjoyed a meal al fresco. True story: MEG RYAN AND JOHN MELLANCAMP WALKED BY. Why?! Why on Earth would they be in Durham?! It was very exciting. 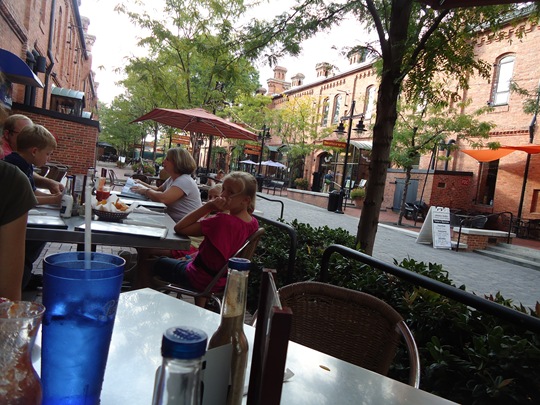 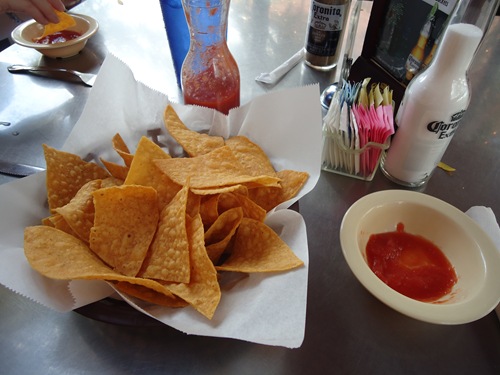 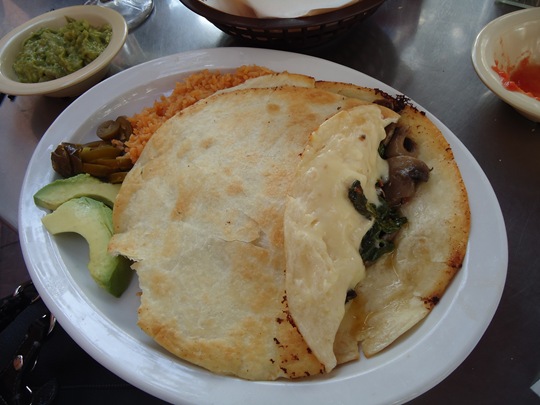 AWESOME: meeting up with my friend at summer camp at Francesca’s, the cafe where we’d enjoy gelato on summer nights all those years ago. SO great to see her, SO great to travel back in time and think about what crazy teenagers we were. A poem we wrote about our painfully attractive, painfully gay teacher comes to mind. Mon dieu. 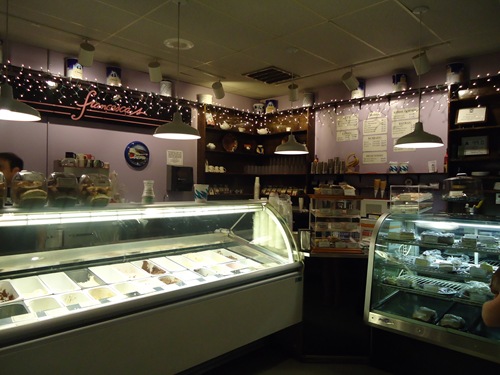 Gelato was great on that hot summer night! 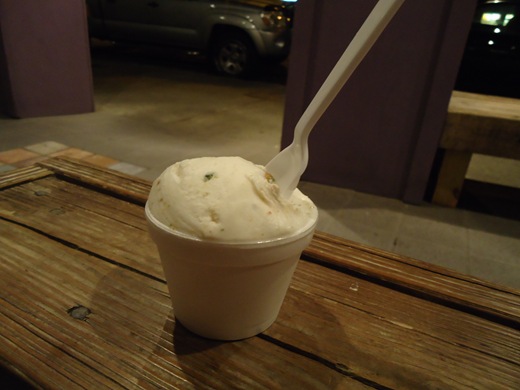 The next morning, we went back to another old haunt: The Mad Hatter, another great cafe. 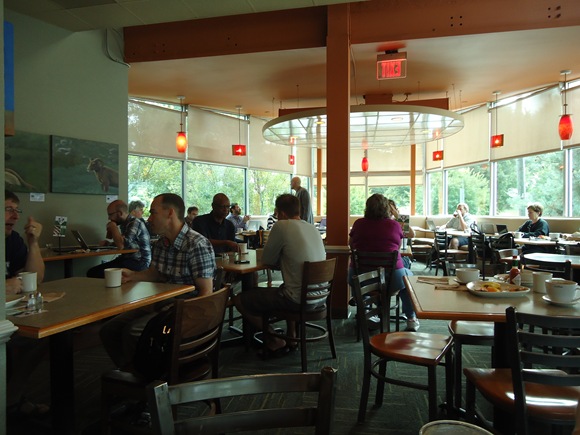 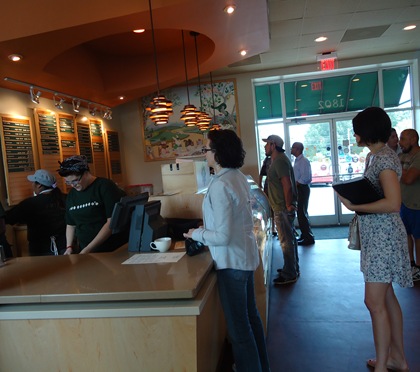 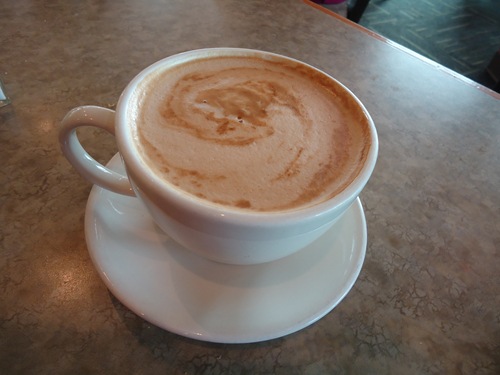 APPALLINGLY huge, albeit beautiful and delicious plate of oatmeal. I mean really. It just results in an offensive amount of food being wasted, unless one is a linebacker. 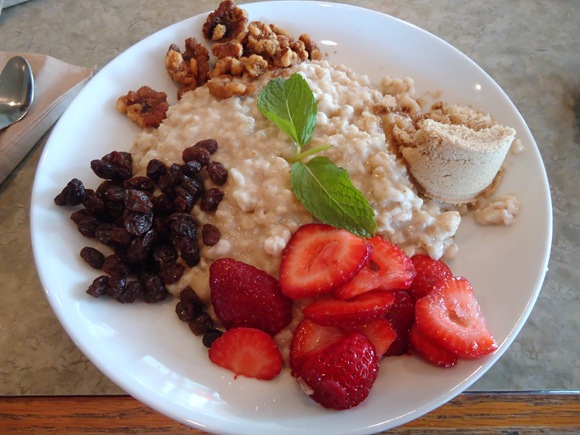 I hope I hope I hope! There are some ifs in that equation (getting in? Passing organic chemistry by the time I apply? Finding something to do in NC for a year while I earn in-state status? Bringing this wonderful boy I love so much along?) but. The program is everything I’m passionate about in one building. I’ve built the past few months really trying to lay the foundation for the kind of adult life I want to have, and I feel SO good about this being the next step.

And yes, I quit my job! School, here I come.

I looked at UNC Chapel Hill's PhD Maternal Health program and it seems soooo amazing. Their public health program is so good. I've since decided to get my Master's in Nurse-Midwifery instead.

Shannon ~ My Place In The Race said...

I love the story about mother lemur who can foil gravity, despite her handicap. Really incredible post, I know I've heard these stories already, but I love rereading them, because those little goofs are so expressive and fun.

It reminds me of getting to watch the Capuchins in Costa Rica. The capuchins were really smart too, they figured out how to get into coconuts, take food out of people's backpacks, and the juveniles played tag.