not my proudest moment

Yesterday took a decidedly peculiar trajectory for me, food-wise.

It began BEAUTIFULLY, with banana oats made in the usual fashion. See how cooking the banana on its own before adding the oats and liquid gives the final dish sort of a caramel color? It has a great caramelized flavor, too! 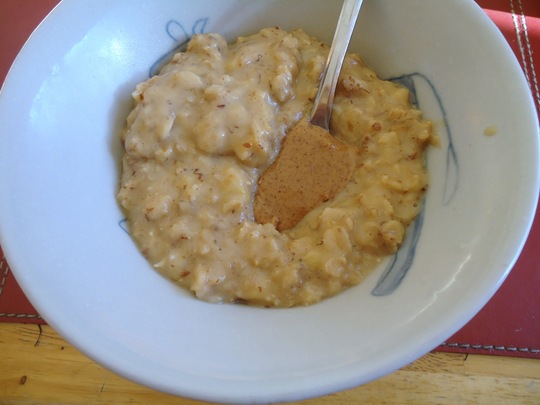 This was also topped with Trader Joe’s almond butter, in its crunchy incarnation. I know everyone else on the Internet discovered its deliciousness like five years ago, but I’m sure glad I did now. 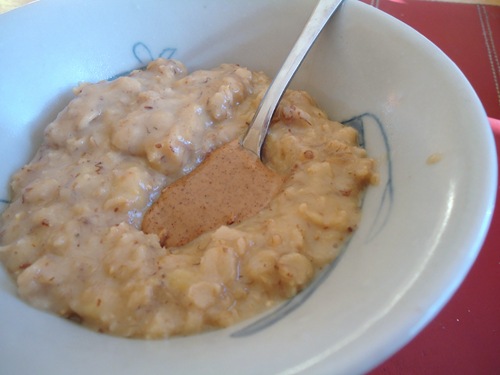 I had the day off, and I just did not feel any real strong compulsion to take off my pajamas. Or go to the gym.

And then I started feeling… I don’t know… bleh.

Throat hurty, physically and mentally worn out from the week.

So… I spent most of the morning sipping tea and sitting on my coach, working on a project I will reveal at the bottom of the page.

Round about 1, I was sort of hungry (though, understandably, not hugely due to the sedentary nature of my morning). Lunch was a fairly pathetic assortment of things that were taking up space in the kitchen in a disorganized way. This was my attempt to streamline. 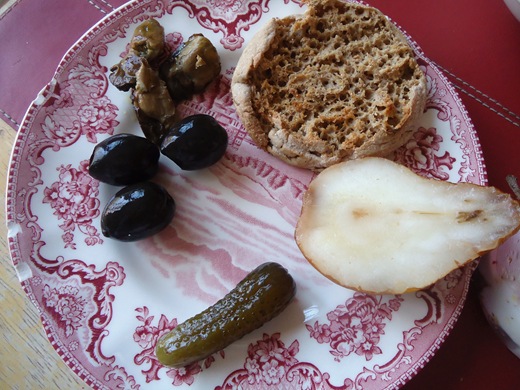 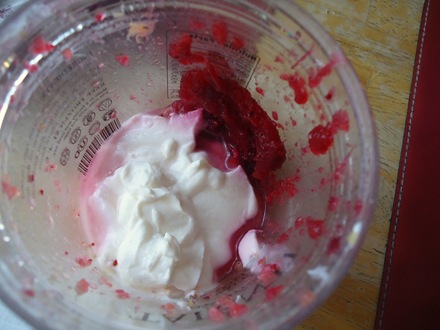 Annnd the last of some tofu microwaved with barbecue sauce and mashed up (yes, horribly unattractive). 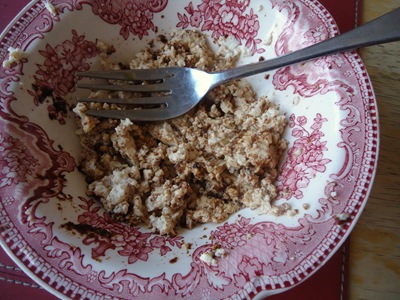 Quite the homely ensemble, eh? Everything tasted… okay, I suppose, but I wouldn’t call it the most coherent of meals. 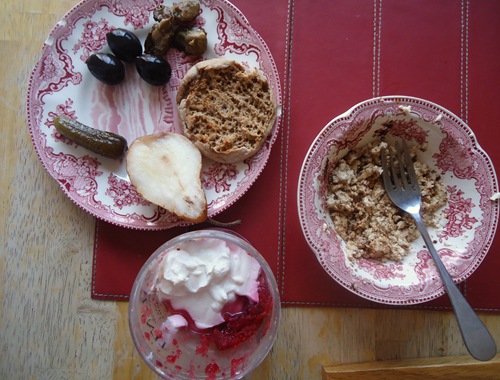 Rather unsurprisingly, two hours or so later I found my hunger levels unsatisfactory. And ate a whole bunch

Then I did some atonement via kickboxing to an Exercise TV workout, which did make me feel better and more energized than the rest of the day.

Showering and using my new shampoo that I got super on sale at the salon and makes my hair intensely shiny helped.

And then it was off to a slightly weird and depressing event- there was a shakeup at the nonprofit where I did my Americorps year and the director of programs was unceremoniously booted from the job she’d held for TEN YEARS with no notice. In 2011, the funnest year ever to be unemployed.

So everyone went to Rustico for drinks. Rustico is known for having an epic beer selection, so I said what the hey and got a Tripal, which my best friend taught me about. They taste… not too beer-y, which is always my goal when I drink beer, hahahaha.

Anywho, that event ended up going for like four hours! So I went back to the boyf’s and he was super excited to be making some eggs but I was just… really tired and my stomach wasn’t feeling it and I just wanted to drive home and go to bed.

Not my proudest moment. Nor my best night of sleep, despite the exhaustion.

This is what we call a “Sorry about that, body” breakfast. 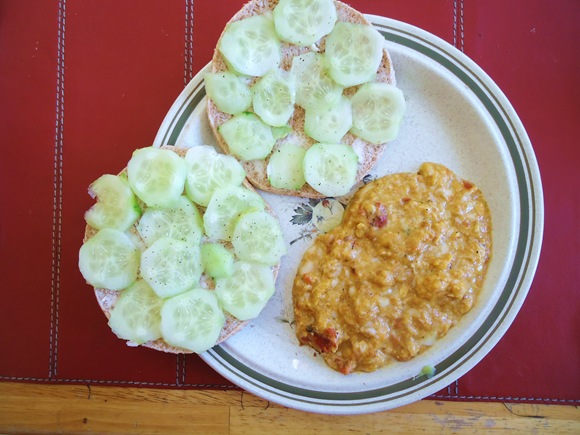 I figured it’d probably be prudent to include vegetables in my breakfast, since I’d had a grand total of NONE yesterday.

And, wouldn’t you know it, we had gorgeous local cucumbers (so teeny!) and I had a powerful craving for the tea sandwiches my grandma used to make of just bread, butter, cucumbers, and salt.

So I did that, albeit on a sandwich thin. Butter is SO SWEET AND DELICIOUS! I used a teaspoon, max, and it goes such a long way. Try this. Your taste buds will thank you! 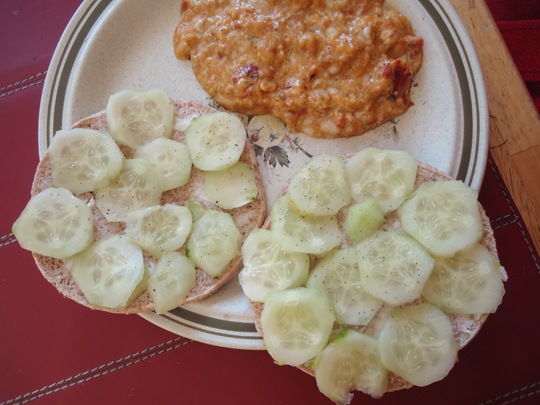 I also read the link on Iowa Girl Eats to Gordon Ramsay's scrambled eggs and WOW! It is so worth watching! His secret to great texture involves putting a pan on and off high heat, rather than cooking it on low; and adding salt and pepper at the end so that the salt doesn’t make the eggs watery. 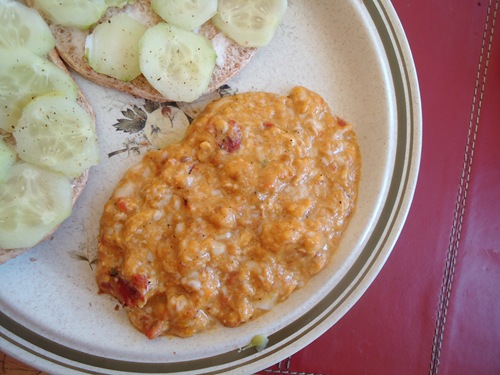 But now for something completely different- something of which I am VERY proud:

I made a recipage!

Check out, in a user-friendly and photo-filled format, the greatest hits of my recipes- vegetarian friendly-stuff if you’re doing Advent like I am; everything you could possibly desire for the holiday season from cookies to bread pudding to the best banana bread ever; and SO much more!

I love bananas in my oats and totally thought of caramelizing the banana first, but have been too lazy to actually try it. Now that you've recommended it, it's on the menu tomorrow.

Hope you are feeling much better now. Love the idea of a recipage.

I hope your throat and your tummy are feeling better! We all definitely have those days... ;-) GORGEOUS cucumber sandwiches!!