The other day I was at a community event with my boss and our SNAP (otherwise known as food stamps) outreach coordinator. This woman came up to us and went, “I hear you’re the nutrition ladies!”

I opened my eyes wide and said UM, YES!

My job is so cool.

My day begins by walking into our building. I have an office (my first time with my own desk- guys it is just so exciting) but most of our space is a warehouse.

The warehouse guys are awesome. One of them decorated these pumpkins and left them in the lobby to greet visitors and volunteers. 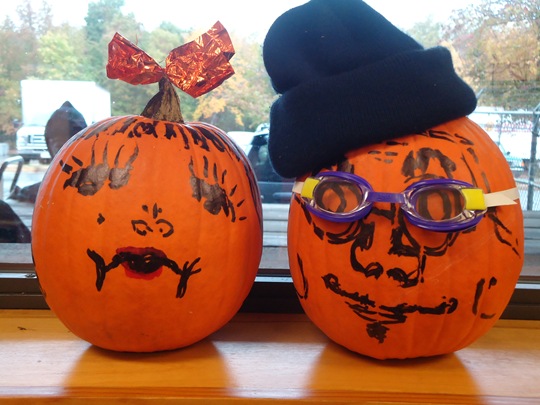 I start the day. Drop stuff off. Catch up on email.

My next stop is the warehouse. A place where I do a big part of my job.

My program, Kids Cafe, is the program that makes weekly deliveries to after school programs. Those programs can then serve a daily snack or supper to their kids.

This is funded (in part) by CACFP, the Child and Adult Care Food Program, a USDA program that funds after school/day care/etc. places where kids go. Basically, the philosophy is that low-income kiddos can get free or reduced breakfast and lunch when they’re at school, but getting a snack (or, really, more like a substantial dinner) at the community center where they go after school helps ensure they’re not ending the day hungry.

SO. I help pack those deliveries.

Rodney, our driver who makes all of our deliveries (who is one of the funniest people I know, and hunts on weekends with a bow and arrow and has promised us all deer chili), will have laid out the food we will be packing that day.

We have a group of volunteers pack our nonperishable foods (granola bars, canned veggies, raisins, oatmeal, etc.) once a week on Tuesday afternoons (volunteer here if you’re local and interested!).

However, things that are perishable- that’d be bread, frozen foods, meat, and most importantly FRESH PRODUCE WHOO HOLLA- get packed the day of.

The food bank people are rock stars about getting fresh produce. We try to send out three fresh items a week (and of course, also things like canned green beans and boxed mashed potatoes and 100% fruit juice and the like)

It’s especially great when fresh produce items are culturally appropriate—can I get a MANGO?! 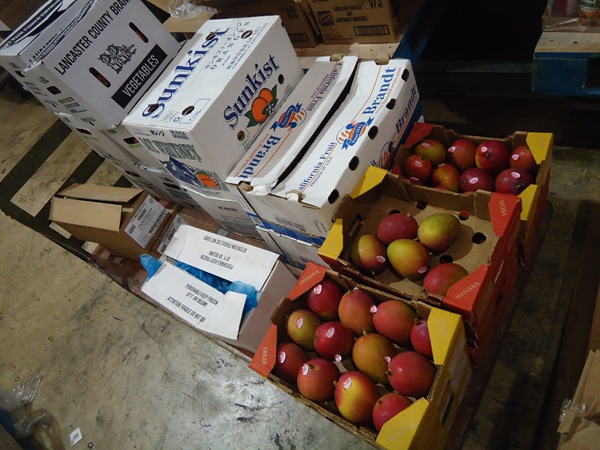 (Yes, those apple boxes are from Lancaster county. Local, baby!)

Lots and lots of stuff gets laid out. Lots. That stuff. This stuff: 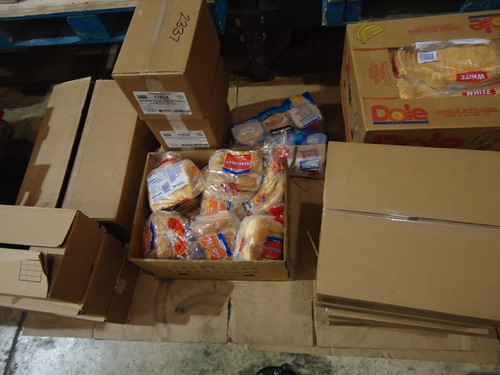 A bunch of those boxes are from our walk in cooler and walk in freezer.

I can totally handle walking into the cooler, but MAN I HATE THE FREEZER. It is super cold and super dark and somehow, somehow despite it being a highly inhospitable climate, there are still MICE. (And don’t get me started on in the cooler. It’s GROSS. And since when did mice like cauliflower? I thought they only liked junky fatty things!)

Quirks of the USDA that I find interesting: the food bank delivers food and then gets reimbursed by the government. However, there are different rates. If a site serves a snack, that’s two food groups, and they get reimbursed a small amount. (An example would be like an apple and a granola bar). If, however, they serve a supper (5 food groups- a grain, a meat or meat alternate, two kinds of produce- 2 fruits, 2 veg, or one of each- and milk) the food bank gets reimbursed more than twice as much.

And in another USDA quirk, yogurt doesn’t count as milk. Neither does cheese. Those are both meat alternates. The only thing that counts is white or chocolate, 1% or less fat, liquid milk. It means we get a LOT of milk.

I’m incredibly entertained by the running cow on our new containers of milk. 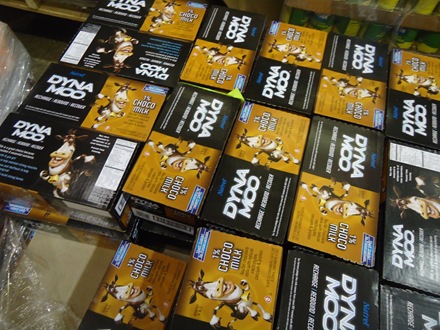 I also have a CD from the Virginia Department of Health that I keep meaning to listen to- it’s children singing/wrapping songs about healthy cooking.

Anyway, so on any given day we get our “pull sheets”. That will go to the site, and has the items we need to pack for them for the week, as well as the menu they use to serve their meals. Then Rodney the driver, Amy my boss, and I go around grabbing things and filling boxes.

I’m impressed with the variety, although dang those kids love their meat. 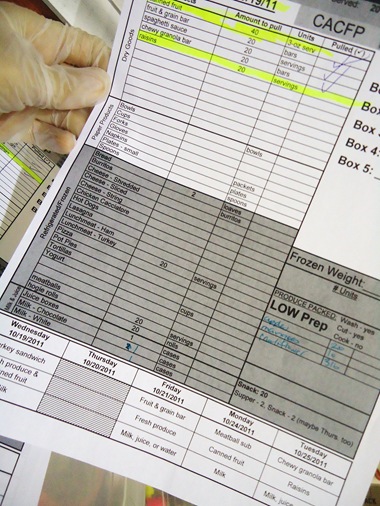 Then it’s time to hunt around the warehouse. Everything we get is in bulk, and it all arrives on pallets (sp? I was going to write “palates” but obviously that is not correct. Though apt for a food blog).

We actually only half half a row in the warehouse… it really isn’t enough for all our stuff.. as a result things are fairly disorganized and spread all around the floor and the shelves and you have to climb around to find them. 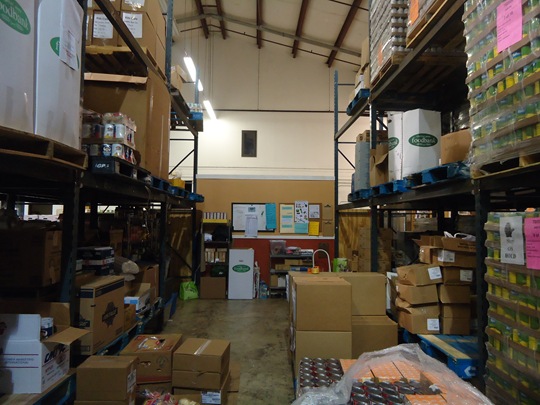 But really that is sort of fun. “Oop! Need canned fruit! It’s up there! Time to Spiderman it up!” 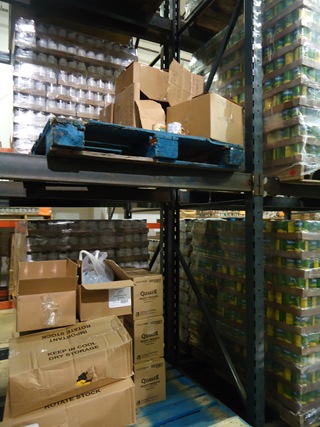 Then we pack. Tip of the hat for using recyclable cardboard boxes out to the sites (and trying to reuse them if they’re still in good shape). 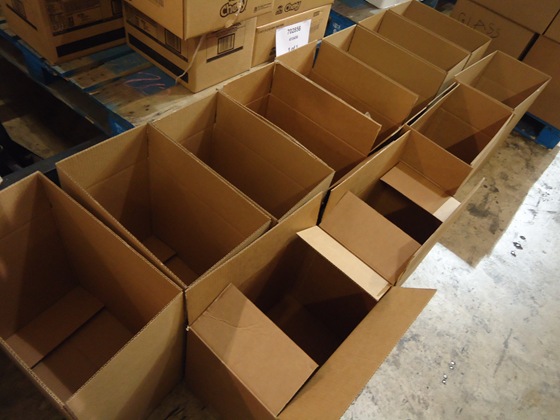 We also just appropriate boxes that fruits and vegetables get delivered in to pack, too. Those banana boxes are pretty ubiquitous. (As evidenced by the fact that there’s one in my boyfriend’s living room. He works at one of our delivery sites). Cool fact about our produce- we get a lot of it at a PRODUCE AUCTION. Are people familiar with these? I want to go to one! 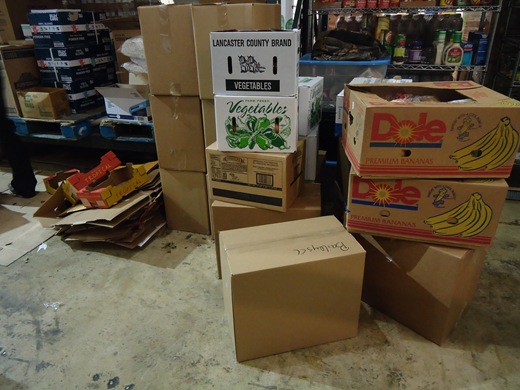 Wag of the finger for wrapping items in plastic bags :( I get that for hyegenic purposes it’s necessary for some things (any meat, for example), but I really want to head in a more sustainable direction (I currently have a crush on the Pittsburgh Tote Bag Project) for things like fresh produce.

We are responsible for weighing everything we pack, in subcategories (produce, bulk, and bread). 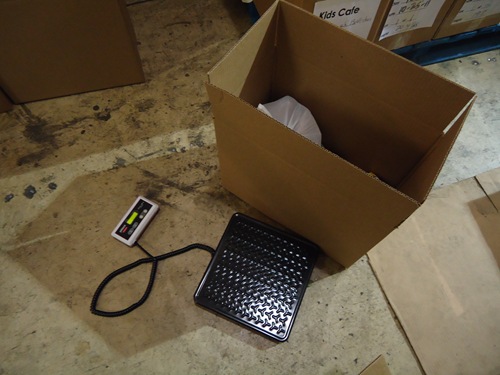 I have also grown up close and personal with my tape gun. These things are such a pain. 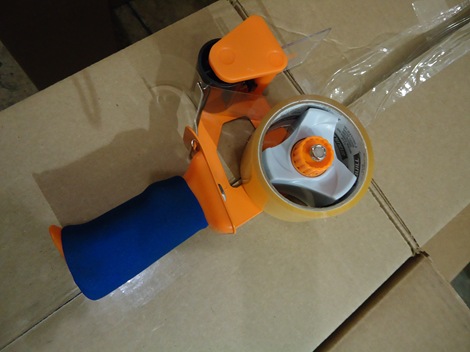 Packing in the warehouse is great in that it is a lot of physical activity. Though I am slightly scared that I will inevitably throw out my back. Every time I bend over I kind of wonder if this’ll be the time I hear something snap and be unable to get back up.

Just as an example about the rather unusual activity level for a poli sci major’s postcollege job, the other day we got a donation of over 600 pounds of pumpkins. So great, right! The kids at their after school p;rograms get to make jack o’ lanterns for Halloween!

Guess whose job it was to pack all that?

Okay, so that is the grueling and toiling part of my job (though again, I actually really like that! I hate sitting behind a desk all day).

My job also had some GLAMOUR on this particular day, due to our annual fundraiser: Empty Bowls. Apparently this style of fundraiser is spreading around the country like wildfire. The idea is this: local potters donate beautiful bowls. People come to attend this fundraiser and purchase a bowl (ours were $25) as a donation to the food bank, then enjoy delicious soup donated by local restaurants.

The selection of the bowls was beautiful and varied. 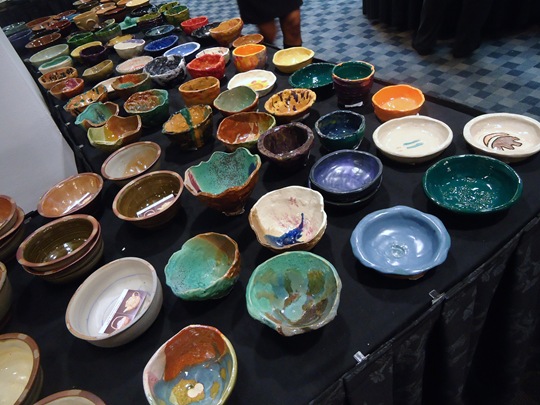 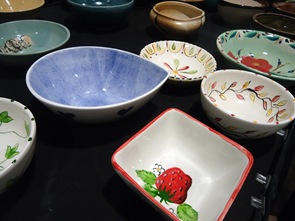 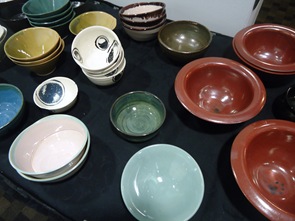 Anyway, we got relieved of that duty and got to go up and eat soup!

We were in a really beautiful space donated to us for the event. I wish turnout had been bigger :( We were talking about it later and we may’ve just picked the wrong neighborhood. I feel like we would’ve cleaned up if we’d been by one of the big government agencies buildings. Federal workers would’ve been all over this! 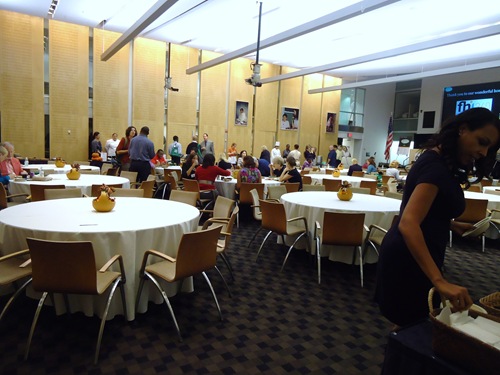 Anyway, more food for me :D 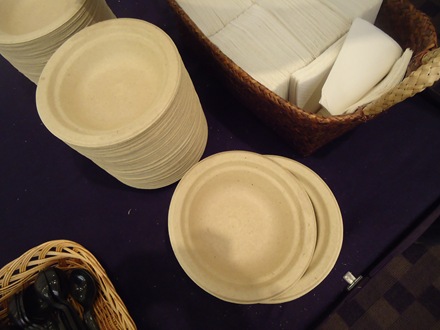 Hurray for lots and lots and lots of bread! (Donated by Corner Bakery. There were a lot of big loaves- I ended up just ripping off pieces!) 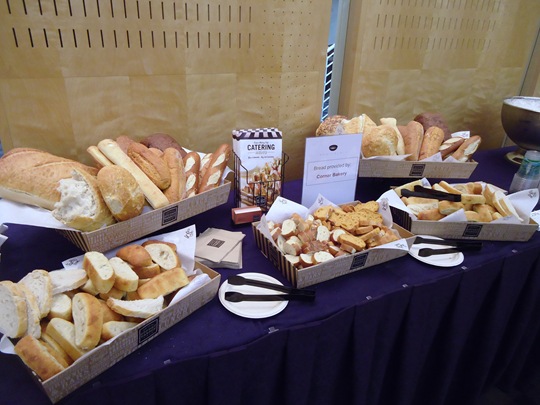 I ended up trying LOTS of kinds :D

First I enjoyed a butternut squash and white bean bisque from 1st& Fresh. 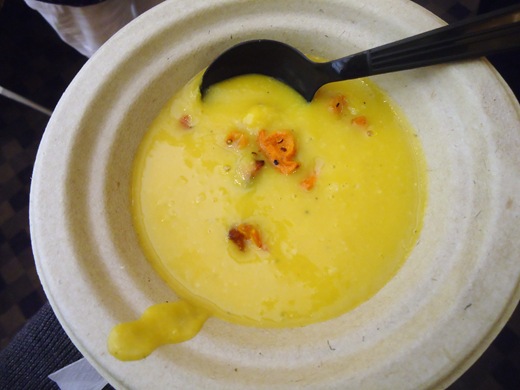 The highlight was definitely the roasted carrot garnish. I am all about texture in soups! 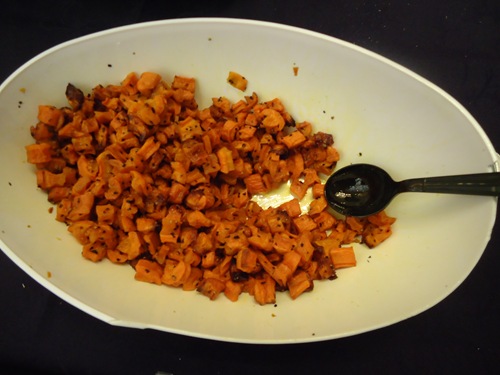 I had the best clam chowder I have ever tasted from Ris. Perfect balance of broth and creaminess, perfect seasoning, perfectly cooked veggies. 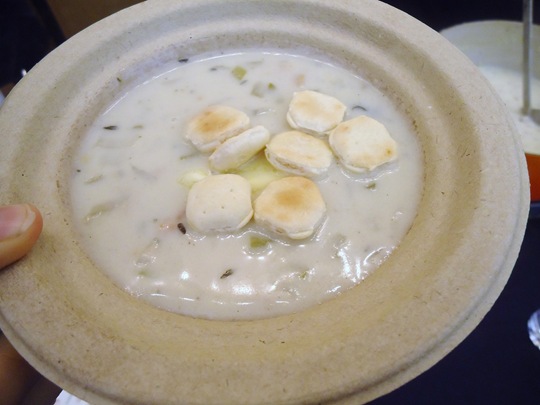 Amy, my supervisor, had never tasted clam chowder before! She liked it :D I mean obviously, if you’re going to try something for the first time, it’s pretty nice to get it from one of the best restaurants around. I grew up on Campbell’s :D

The bowl was enhanced by extra butter they insisted on melting on top (!). I also had a great hunk of sourdough ripped off one of the Corner Bakery loaves. 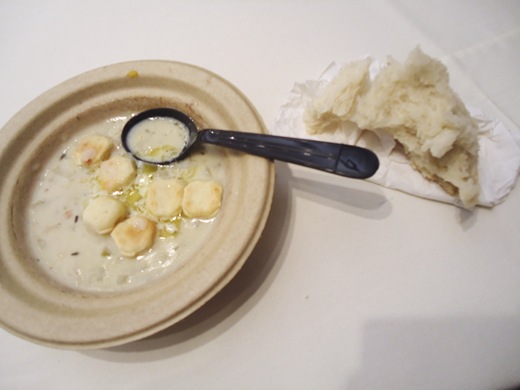 So rich I didn’t finish it!

Probably my favorite soup was a carrot-lemongrass one from Gepetto catering. In all honesty, I couldn’t really taste the lemongrass… it was just really really good carrot soup, to me. That cracker came from them. It had thyme in it. MAN it went PERFECTLY with the soup. 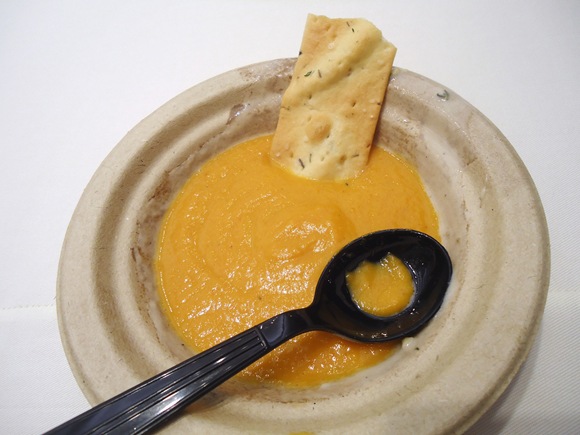 And finally, in the so-rich-I-didn’t-finish-it-but-man-I-sure-ate-a-lot! category, was wild rice and mushroom soup from Morton’s.

I never order cream-based soup but gosh it is good.

This had really wonderful meaty mushrooms (a bunch of different kinds; couldn’t place them all), and really nice seasoning. 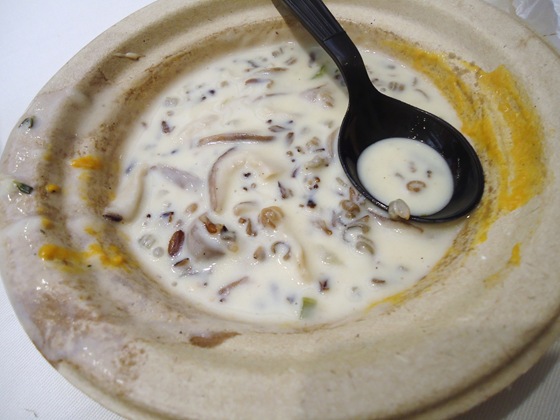 (Yes, I started layering all my soup in the same bowl. It seemed wasteful to get a new bowl each time!)

There was also caffeine-free Diet Coke (I’m sorry, but what is the point?! I mean, unless you’re a Mormon, I guess. But to me, caffeine is kind of the whole POINT of Diet Coke!), of which I accidentally drank two cans. Artificial sugar, I wish I knew how to quit you.

Actually, real sugar, I wish I knew how to quit YOU.

But dang, these cookies from thebestcookies.com were, in fact, THE BEST! They tasted so FRESH! And all their ingredients were organic and Real Food. Dangerous, man. Plus the people who worked there obviously got to take home leftovers… so…. there are four of these in my freezer. 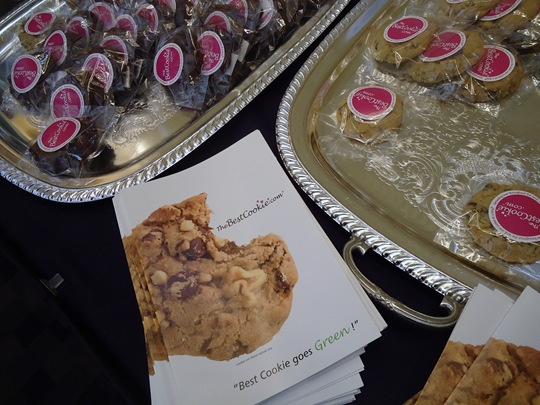 Thank you for the lovely shout out to The Pittsburgh Tote Bag Project! Love your blog ... this is a great post. It is up on our Facebook page www.facebook.com/tote4pgh ...