The title of this post is meant to be Gob Bluth’s chicken noise. Successful?

Truth: sometimes I just want to eat a chicken. A dead one, you know? A chicken that was once alive and is now dead. Why? Because chicken tastes good. It is yummy, it is healthy.

So I found myself with a dead chicken. I was stoked! 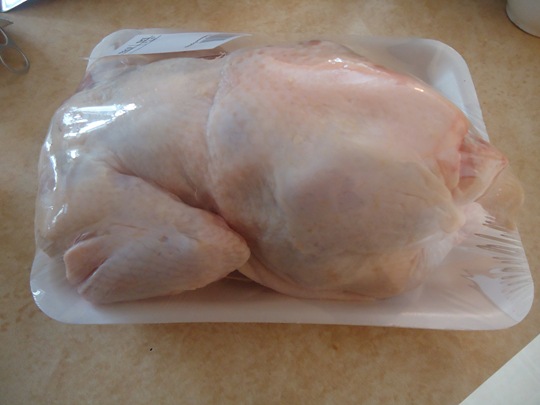 Why was I stoked? Because, since I saw Food, Inc, I have been largely afraid of dead chickens. Afraid of the ethical maelstrom one enters when making the decision to purchase meat, afraid of the salmonella that is rampant in the unhygienic nightmare that is the standard poultry farm.

And yet! There is hope. 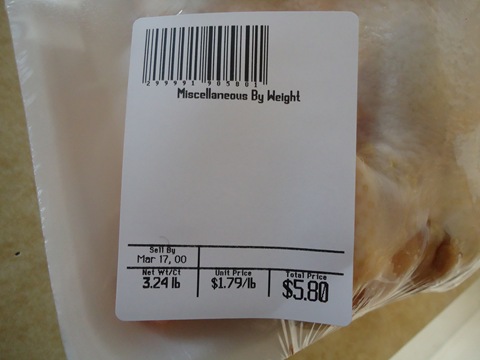 Dirt cheap? No. Reasonable enough that I, definitely trending flexitarian of late, can buy it once in awhile? Yes.

I didn’t really know what I was going to do with it the other night, so though the lovely and fatherly butcher offered to chop it up for me, I brought it home whole. But then decided I wanted pieces. Soooooooo I consulted the Time Life Good Cooks series (my mom helped edit it!).

It is a positive textbook, divided into volumes by categories (“Poultry”, “Beef”, “Eggs and Cheese” etc.) and the poultry one gave an easy (ish) diagram of how to whack up a chicken. 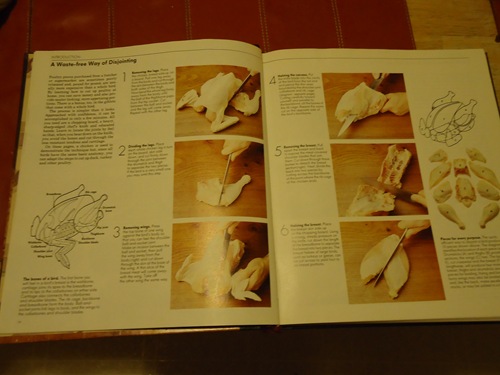 I have to say, there’s something sort of pleasant about butchering a chicken. I often get grossed out by raw meat, but somehow following this very scientific diagram made me feel like I was a doctor, dissecting something to study it.

It helps that when something is purchased from somewhere you trust, it reminds you of an animal, rather than, you know, the freakshow that is produced from your Perdue and the like. You know it was kept in reasonably clean, humane conditions. You know its life was ended quickly (I think the standards for halal and kosher are very similar. Go figure).

Anyway, I was quite pleased with my pieces: 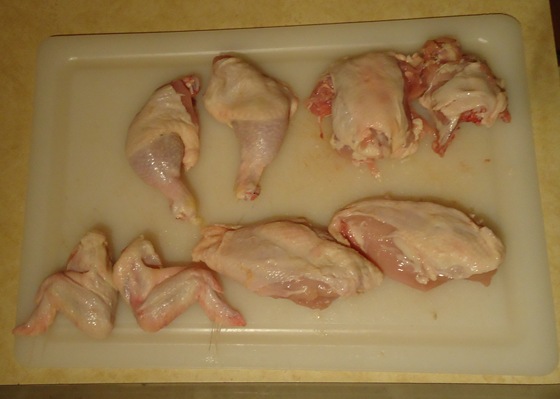 Of course, the obvious thing to do was brown them in a thin film of oil in a nonstick skillet on medium. 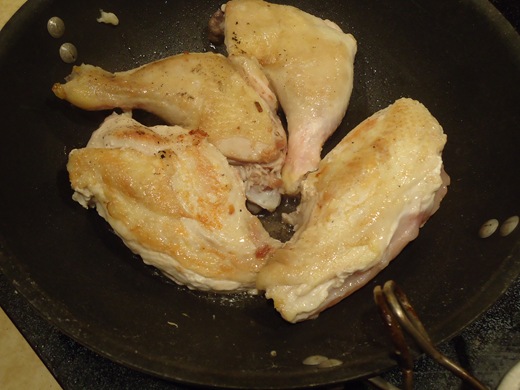 Brown on one side, give a flip, brown the other, set aside on a plate.

Then, though you know I love my chicken, I loooooooooooove my plants. Set to breaking these guys down: 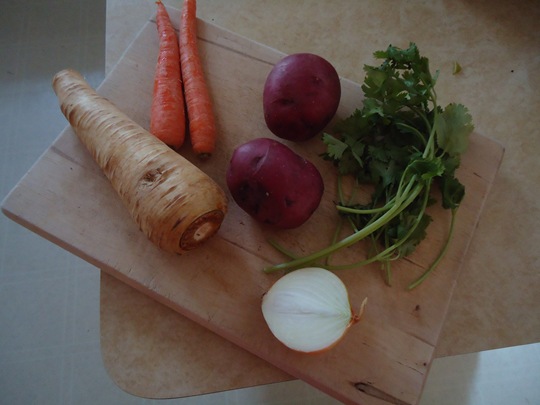 The browned chicken had rendered a fair amount of fat. I drained out all but a thin film. But you know, YOU KNOW, I left those heavenly crispy bits coating the bottom of the pan. Flava, baby! 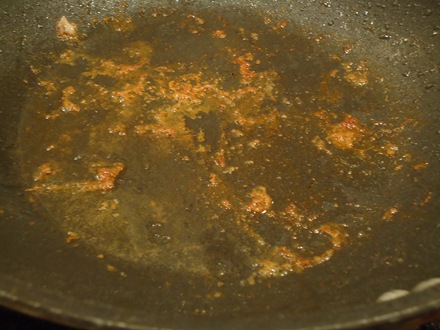 In went the veggies, cut bite-sized, to get a preliminary browning. 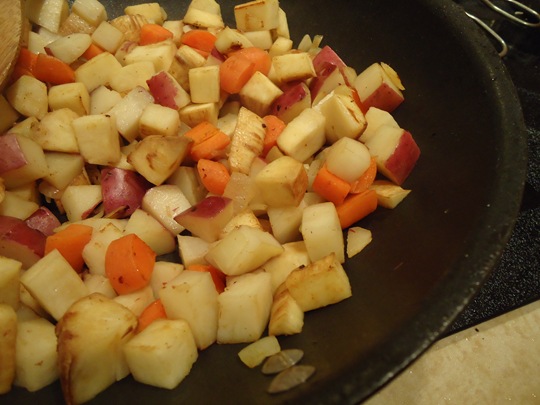 So I had spent much of the earlier part of the day failing to pay attention in church and thinking about what direction this chicken stew was going to go in. I started fantasizing about the various delicious rice dishes the families of the kids I work with (the vast majority of whom are Hispanic) had brought in to our Thanksgiving celebration. Seriously, can someone’s Salvadoran grandmother sit me down in the kitchen and teach me to make rice?

I decided this would be a chicken, veggie, and rice affair, like those dishes, but considerably alter the proportions (with rice being the smallest, not biggest, piece of the puzzle).

Scooted over went the veggies, in went the rice to the middle. 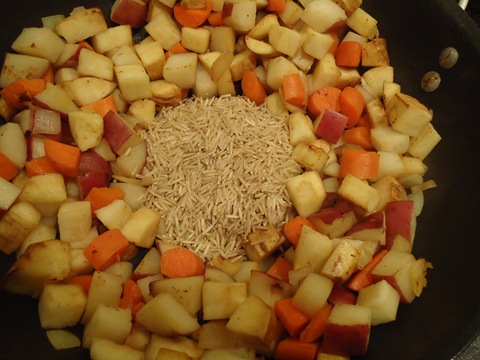 Now when this gringa tries to go Latin, she takes what shortcuts she can. Thus best friends of the ambitious, wannabe caliente home cook, Sazon Goya and Rotel. 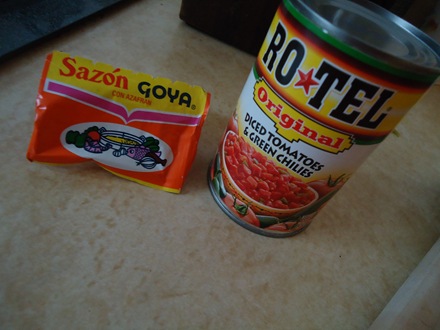 I basically dissolved the Sazon in enough water to cook the rice- in my particular example, I used half a cup of rice, 1 cup hot water from the kettle, 1 packet Sazon.

What an adorably alarming color! 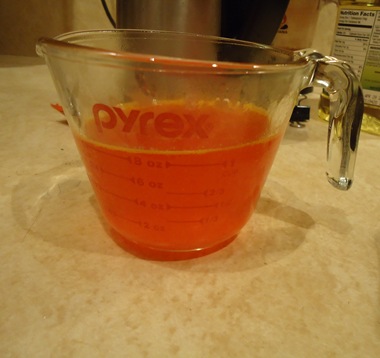 Dumped that on top of the rice.

Then nested on the chicken. 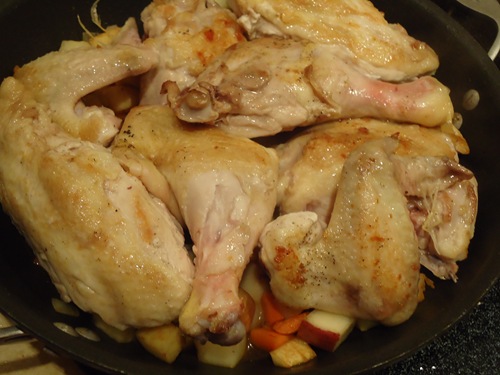 Then the Rotel atop the chicken, for moistification. 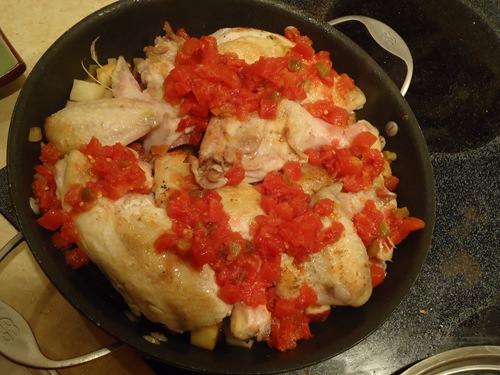 Then the lid. If yours is sort of straining to cover all the goodness, simply weigh it with a few cans. 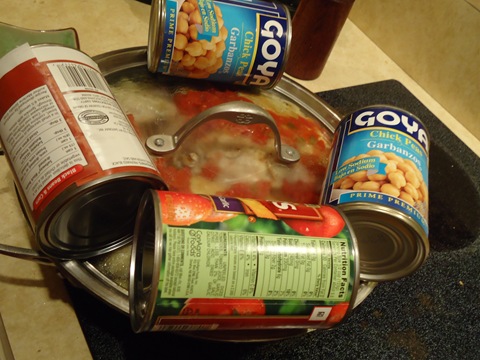 Once off the stove, I sort of just stirred everything together to make a big yummy mess (this made a TON so I left some of it back in the pot!) 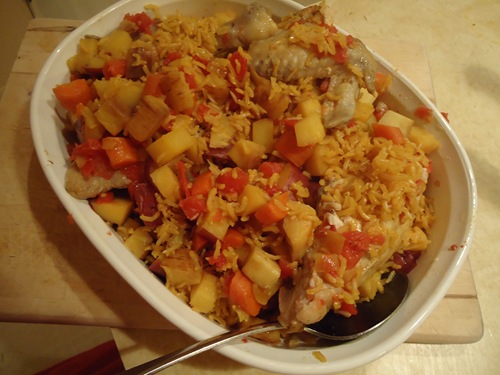 Aded some cilantro on top, to throw in some color and you know, this was “Mexican”. 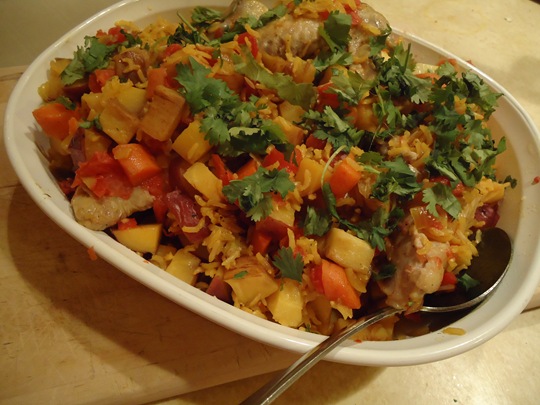 Thoughts? This is neither Mexican food nor a particularly authentic chicken stew.

That being said? This meat was MOIST! WOW! Being in that pot with the steaming vegetables, the seasoned water and the tomatoey Rotel on top meant that the chicken just soaked up all that moist yummy goodness! It was scrumpsh!

As for roasted vegetables and rice, they are always good! Who cares if it was an odd medley if every element in it was good? 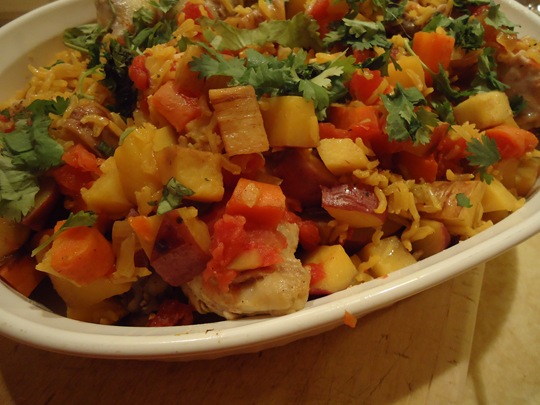 Confession: this was actually my second roast chicken in as many weeks. In my defense, much of the first one had to be thrown away due to blackout stupidity. God, I hate power lines. Slash love and need and hope they won’t be lost again tomorrow.

Anyway, the first time I made my now-classic Zuni Cafe roast chicken. Salted in advanced, simply cooked in the skillet in its own juices, it is subbblimmmmmmmmmme. 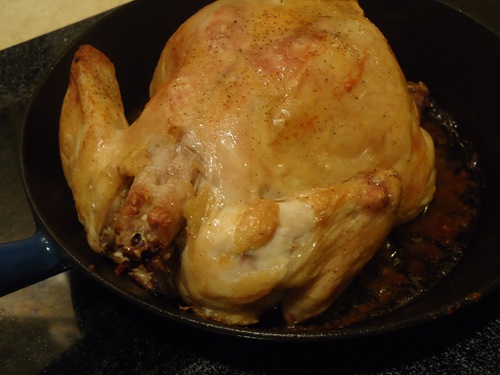 And thos escrummy juices in the pan, cooked down, become a glorious gravy that soaked everything so delectably. 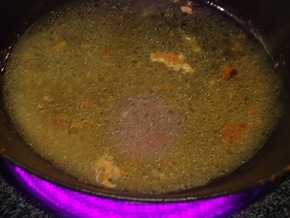 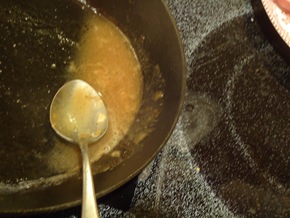 In a concession to my plants, I made cabbage (actually quite good- just threw into the hot oven with the chicken tossed with honey mustard and apple cider vinegar, and it caramelized quite nicely, if not real photographically). 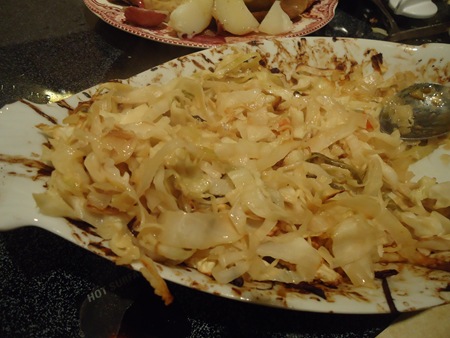 Then I dug into my meat and potatoes :D 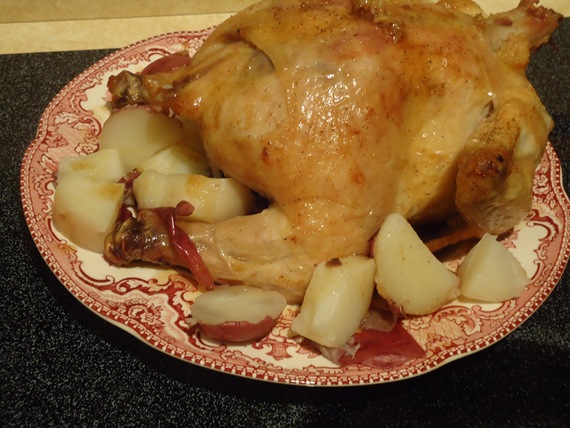 All I can say is thank God for your daydreaming in church, the fatherly Lebanese butcher, and the odd medley of vegetables. Everything you did for the chicken created a taste bud constellation.

Out of this world tasty, Ileana.

I LOVE eating chicken like that!! It is making me hungry...