did you want some kale with your kale?

Me (with a bag stuffed with more than two pounds of kale): “… but is it enough?”

Farmer at market (deadpan): “If you have leftovers, you could feed them to a rabbit.

Um… we had enough kale. 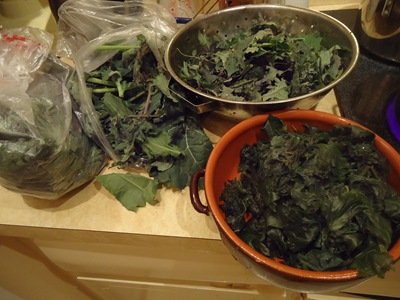 In the pot, the ton I had already steamed. In the colander, the freshly cleaned ton that I was about to steam. In each bag, another ton.

My family seems to’ve instilled a somewhat specific phobia in me of running out of food. Have you read the Odyssey? Yknow how everywhere he goes they throw feasts at him? Yeah, those’re my people.

Kale was delicious. So fresh and perfect it required almost nothing. Just steamed and served with salt and pepper, olive oil and lemon. We Greeks call it horta. 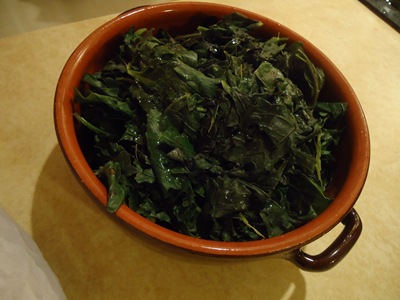 In defense of my little phobia, it is clearly genetic in nature, as we have rawther a lot of potatoes. 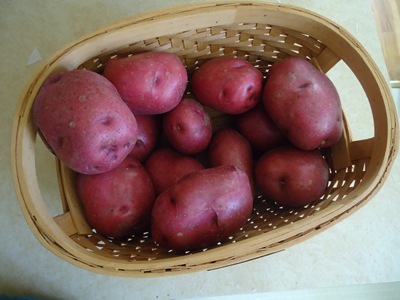 Part of it is that my mother is a carefree lass who reads a recipe and sees you need 2 and a half units of something, but apparently decided to go with kilograms rather than pounds.

The recipe in question was quite fascinating: potato and kalamata olive stew, a recipe I’d copied from The Greek Vegetarian when I borrowed it from the library earlier this summer.

I’d never had anything stewed with olives and the idea seemed sort of odd, but I was sufficiently intrigued to try it and WOW IT WAS REALLY GOOD.

You start with a good amount of olive oil (1/3 of a cup), your spuds, some garlic, and the olives, and get everyone coated in olivey niceness. Then in goes tomaters and their juice and everyone stews together til the spuds are tender, at which point you finish it off with oregano and salt and pepper. 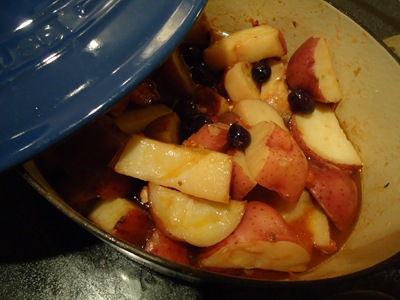 So the occasion for the ridiculous quantity of food was, in fairness, people coming over. However, I was a lazy bum for this little shindig.

My mom had Friday off and spearheaded much of the shopping. My Friday was gross at work and that night there was ridiculousness, due to the fact that a fun game night at my friends’ ended up with my car getting towed AGAIN and me getting home, courtesy of a ride from my friend, angry crying, at 2 something am. Then my mom got up at 6 to go to a soup kitchen cause she is a better person than I. I got up early and booked it to my friends’ building, where I adequately guilted them (I work there at community events and get paid diddly for it and just for fairness, oh yeah, there’s NO NO PARKING SIGN) and we booked it to the lot and got the car released.

But I was in a daze! 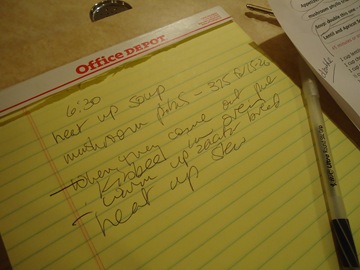 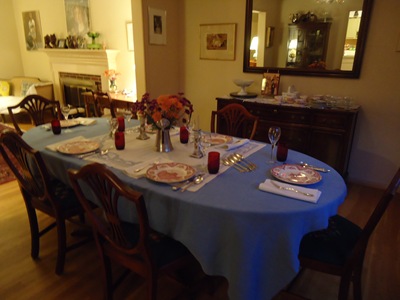 And then the guests appeared! My mom’s sister’s husband and my dad’s sister’s husband had met briefly at family events (despite the fact that my parents are divorced my dad’s family still sees my mom more than they see him) but we wanted to get them together in a smaller group because they have huge man crushes on each other.

We noshed on my mom’s smashing mushroom phyllo triangles, with amusing cocktail napkins (“She was one cocktail away from proving her mother right”, if you can’t read). 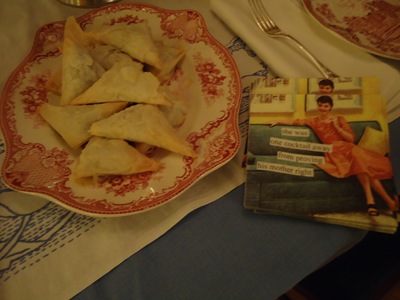 There was za’atar bread.. 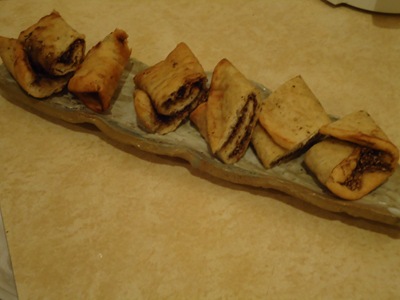 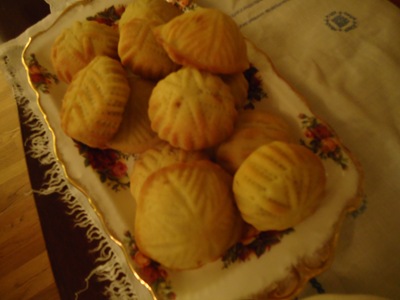 No no no I jest. I was just too amused hearing stories about traumatic puberty/the Vietnam war/etc. to adequately document.

Fortunately, I knew there’d be EPIC LEFTOVERS. That I could shoot to my heart’s desire. 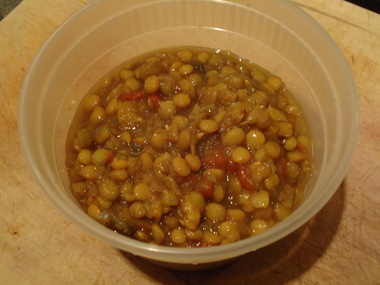 From The Essential Best Foods Cookbook, lentil and apricot soup.

WOAH. Lentils! Dried apricots! Cumin seeds! It was earthy and sweet and zingy and spectacular! 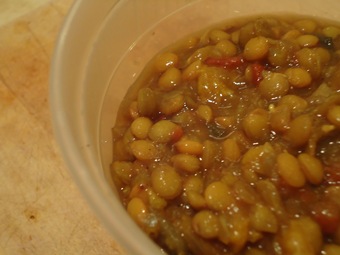 Had it for lunch today with a yogurt and bread: 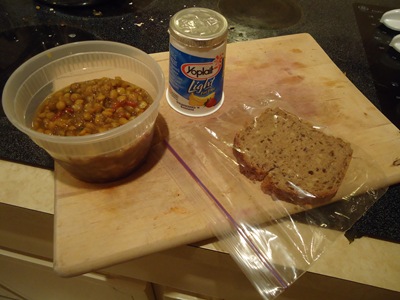 A brief but crucial tangent: this 100% whole grain, flaxseed-studded amazingness from the farmer’s market is probably the greatest thing in the entire world: 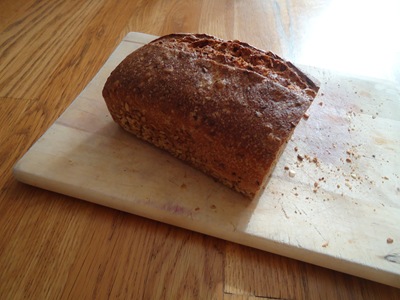 Underbelly! (Get in MY belly!) 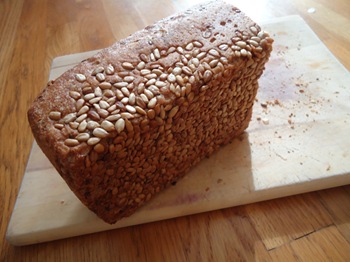 Everyone else came together on my dinner plate. Clockwise from the bottom we have the potato stew, the kale, the mushroom phyllo triangles… 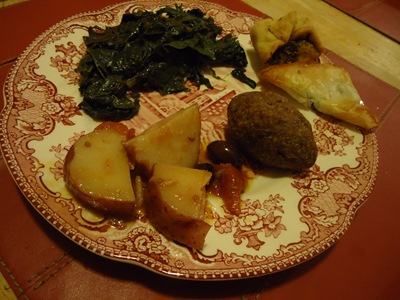 And kibbe! Remember the day I spent with old Lebanese ladies this summer up to my elbows in ground beef? I got to taste some! (Obviously it was frozen and thawed since that day :D)

For those of you unfamiliar, kibbe is an outer shell of beef, bulgur and spices filled with ground beef, onions, and pine nuts (!) 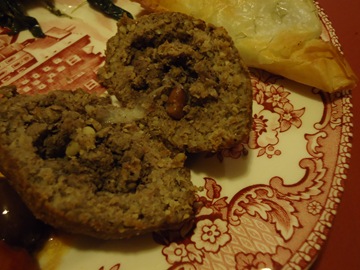 And there were leftovers.

So my mom, Greek that she is, sent one with me to a movie night with my friends.

My car did not get towed :D

That is a lot of kale. I hope everyone enjoyed the meal.

Kalamata olives! Love it. I want to make this stew for sure. I have a bit of a food hoarding issue at school being that I rarely set foot in an actual grocery store. It's all good though, I keep it in check!