So, let’s be honest… Parade Magazine… pretty bad. We get it… for free… so maybe we glance through it. I confess to being fond of the Numbrix puzzle. But that’s about it, right?

However, I looked at a recent issue’s recipe for Grilled Sweet Potato Salad with Bacon and Herb Vinaigrette and was like “… I could get behind that!” 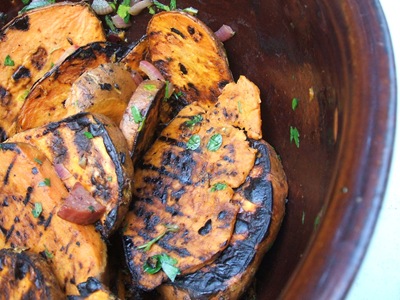 I realize mine looks nothing like the recipe and I really used it for inspiration more than anything else. But nonetheless, thanks Parade!

It all began with a RAGING FIRE! 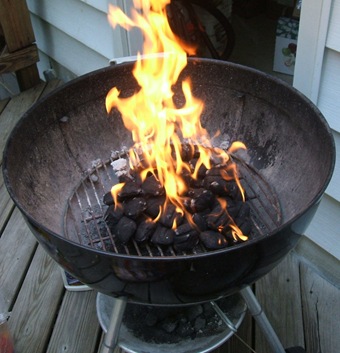 So in all my previous grilling endeavors, I’d been using up an old bag of charcoal… and I do mean old. Before I became the family grill-maestro we grilled… every other year? When there was a man around. Well, now I’m the man! Or something.

So I finally finished the old bag and opened a new one and lit it and- it lit! No need for massive dousings of lighter fluid (yes yes I know horrible for the planet/my health)! And it lit and stayed lit and didn’t have to be re-lit every thirty seconds for twenty minutes til it finally stayed hot! This was exciting.

But it also meant that the grill got hot. FAST. Since I was steaming my sweet potatoes, they weren’t ready. So I thought, okay, I’ll put on my side dish- grilled okra (with just olive oil, salt and pepper). 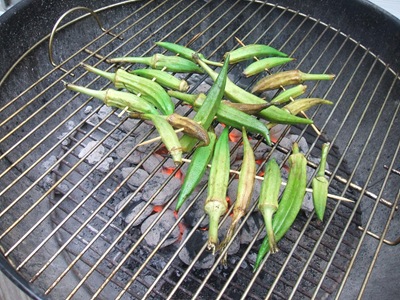 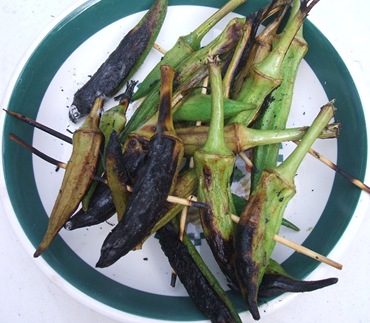 Apparently the new charcoal made for a VERY HOT GRILL. That cooked VERY QUICKLY.

After some frustrated venting (I curse like a sailor when I’m 1. Cooking and 2. Driving) I actually bothered to taste one and it was… totally delicious. I’ve decided that my deal with God is that He’s gonna give me a pass on the carcinogens from the charred food I love so much because I have never smoked a cigarette (well unless hookah that time counts).

I didn’t want to boil them like the recipe said because I hate boiling anything. So I looked up another recipe which said you could slice them and then steam them for 12-15 minutes which is precisely what I did. 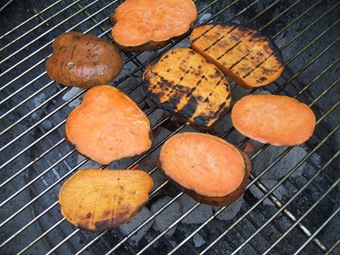 And in the meantime made my dressing. I have no bacon, but I have something better: 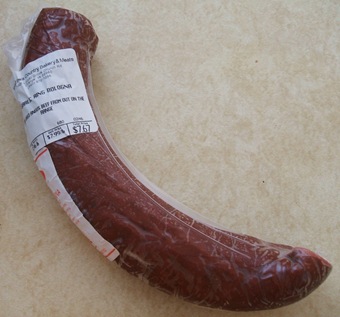 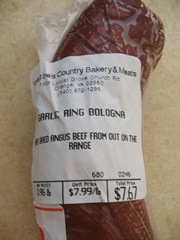 So I rendered the fat from some of that (waaaaaaay less than the 8 ounces called for- more like 3?) and then added some red onion (3 T?) to the pan and cooked til a bit browned. At which point I deglazed with apple cider vinegar (2 T?) and threw together vinegar, bologna, onion, fresh herbs (coupla tablespoons of parsley and a few sprigs each of rosemary and thyme from the deck- one short of a Simon and Garfunkel but the sage died!), and some olive oil (2 T?). 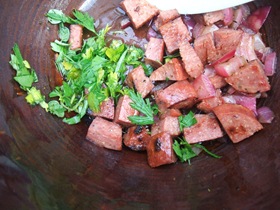 And tossed with the grilled sweet potatoes… it. was. incredible. 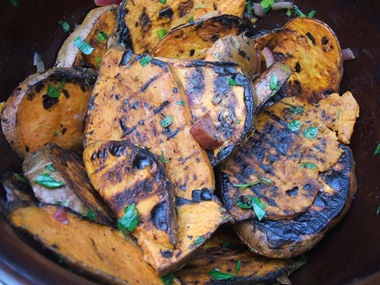 I’m super into the idea of using meat as a condiment this way. You get flavor, you get a bit of complete protein.

Finally, I took some lackluster peaches that had just not been ripening properly and threw them on the grill. They continued to be lackluster. The grill produces good food, but not miracles. 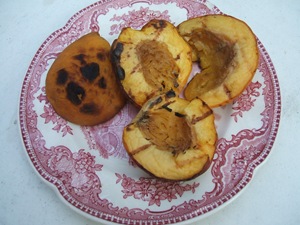 I would like to add that other than the olive oil and onion, this meal was 100% local! So cool!

Unsure if I’m working tomorrow… have had the same headache for roughly four days… think I’ll go to bed.

Yo! Ithink I'll be in nova this weekend. Want to do something Friday afternoon, Friday night, or Saturday afternoon?

Also, I love okra, so methinks I'd like grilled okra. Mmmm.

I love foods that are pretty much burnt to a crisp. It has so much more flavor that way. :D

That looks really good, yum. I never thought to grill a sweet tater. I should think about that for next Sunday (mine and the fella's grill day).

You are making me seriously wish for a grill! Not that I'd know how to use it if I had one...but I would defer to you for help. Maybe if I ever get an apartment with a balcony.

In the meantime. I'll roast my potatoes while making this recipe. Deal?

Oh my goodness, roasted sweet potato salad?! Yes please!! And that is so amazin all your food was local :)

That sweet potato salad looks absolutely delicious! I have had a headache the past couple of days too!

I hope you feel better!

This looks great! And I think I would make the same changes to the recipe that you did.