don we now our ugly sweater

Steve made kale chips, of which I failed to get a picture, so enjoy this lovely picture of me in my ugly sweater (er, blazer, the most enjoyably tacky thing Goodwill had) playing fake drums with kale stems. 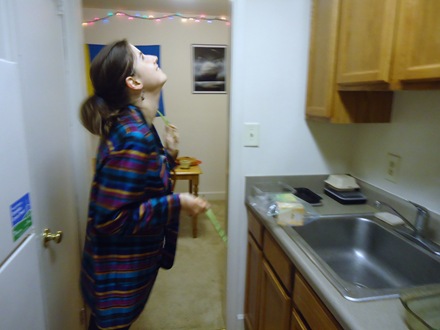 I made the following reasonably healthful but reasonably festive looking items: 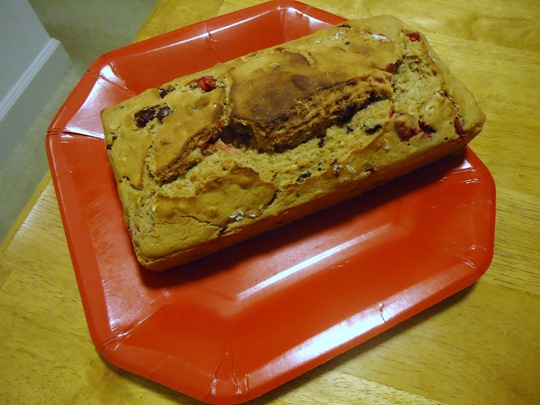 Cranberry beer bread from Food for Laughter which I made using the modifications I made the last time I made it. That lady is so good at bread, man.

Also, a salad using some lettuce from my house on its last legs and some cheese and cranberries for Christmas colors. And homemade parsley dressing. 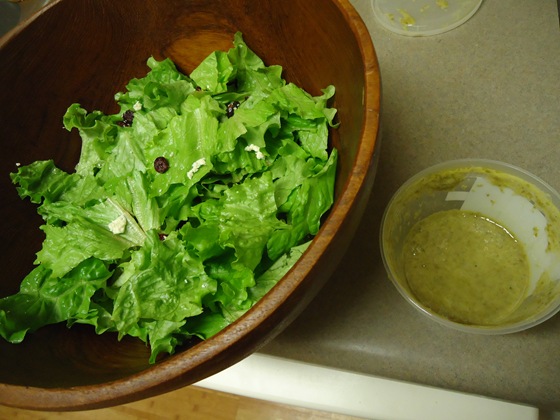 Steve ate this and went “I didn’t know salad could taste good!”

Yes, Steve, the secret is cheese.

So did I focus on eating those healthy items? Of course not.

Instead I focused on eating total junk food.

I ate an embarrassing quantity of cheetos (as did everyone; I think we’d all gone for roughly a decade since we’d last eaten them and forgotten how delicious they were), and lots of that popcorn with Old Bay (?! who knew that existed?! But holy yum, man!) 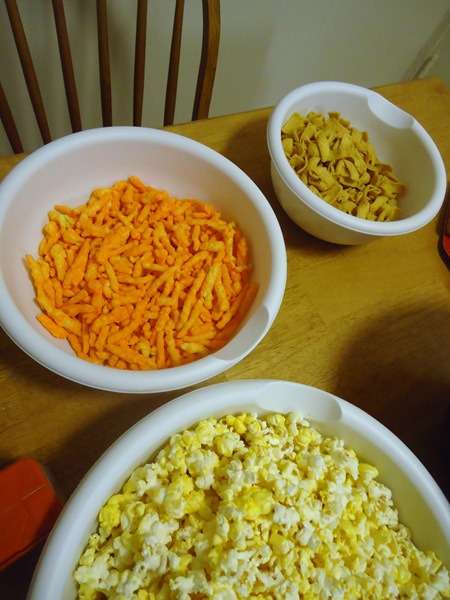 Plantains, which obviously I had to eat in great quantities since that is the plantain law. 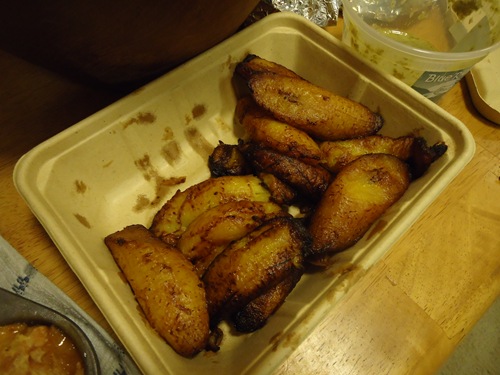 Jillian just started a food blog and everyone should read it!- link here- and she made REESE’S PEANUT BUTTER CUPS BANANA BREAD. 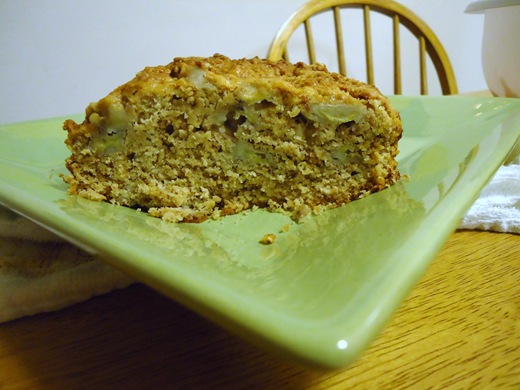 Fortunately, I had made one additional dish that was entirely fitting with the festive/junky tone taken by the evening:

Basically followed from this Cooking Light recipe, except instead of cinnamon raisin bread I used leftover panettone/sweet breads… 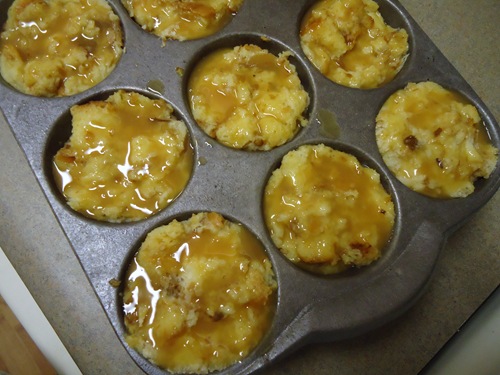 … and I mixed some brandy with the caramel sundae topping and used a lot more than the recipe called for. Cause, yknow, you wouldn’t want them to dry out. 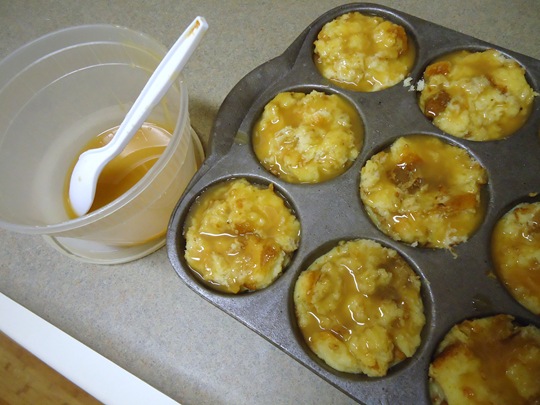 This is what they looked like when they came out of the oven whooooooa mama. 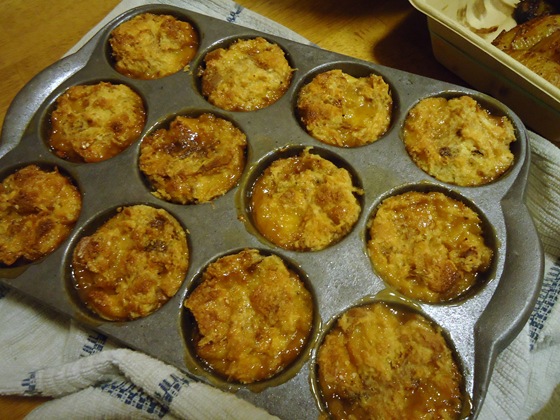 And the rest of the evening was spent festively by the Christmas tree playing a variety of enjoyable board games. 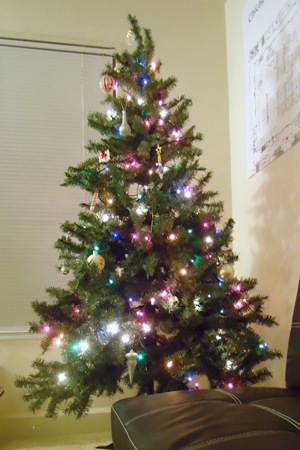 I’ve actually been on a bread pudding baking kick.

We have a monthly interdepartmental meeting called “Chat and Chew”, in which everyone joins up for a potluck lunch with a given theme.

For this past month’s theme of “Thanksgiving leftovers”, I took them at their word and basically cleaned out my fridge and pantry.

Back story: while my sister was still home recuperating from her appendectomy, I’d researched foods that were easy on a post-surgery stomach. Horchata came up a lot, so I repeated a recipe I’d made before and enjoyed- Lola's horchata.

It’s very simple- you grind up some rice in a blender until it becomes the consistency of thick sand, then let it soak for at least eight hours. 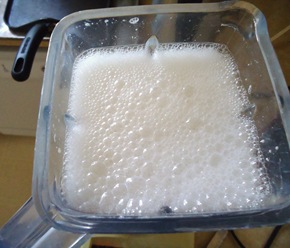 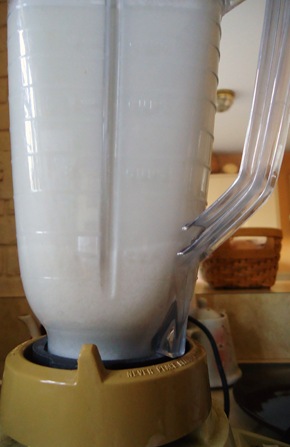 See the gritty layer at the bottom?

Once they’ve soaked, you strain out the solids… 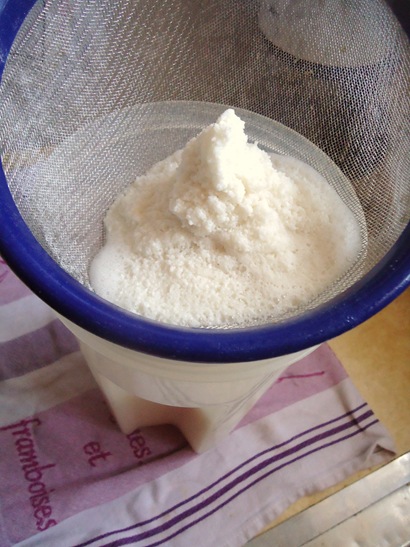 And add a bit of milk, sugar, and spices. 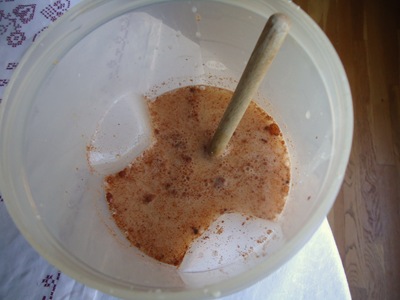 So that sounded like things that would be good in a bread pudding, right? Right!

So I added some of that mix. To give an interesting variety of flavors, I also added some soy nog that I’d bought impulsively because it was on sale and my mom’s iffy on lactose and I figured if it’d stimulate my sister’s appetite while being gentle on her stomach that’d be good. And I also added plain ol’ milk. 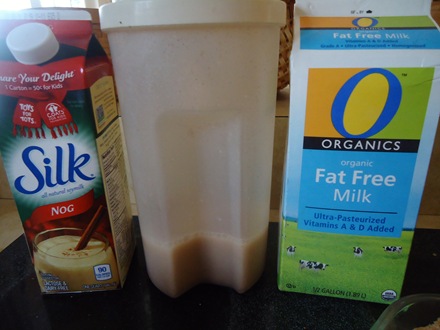 And then I pulled out panettone from my freezer (I always have a ton of bread in my freezer, which is part of the reason I’m on this big bread pudding kick. Well and also because I love bread pudding!) 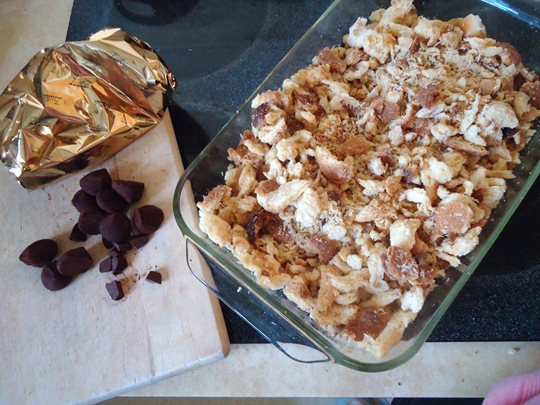 And all those things went in a pot together and got baked up. And it sure was a great big hit! 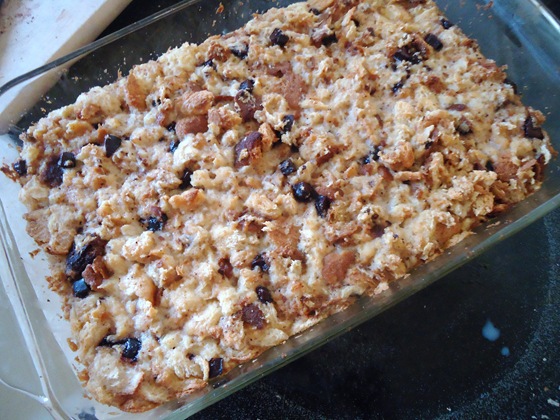 Man, this was just a big parade of junk food, wasn’t it?!

All I want for Christmas is some self control!

Shannon ~ My Place In The Race said...

Bread Pudding is one of my very most favorite things ever!!

My daughter is supposed to wear an ugly Christmas sweater to school on Friday but we went to the Goodwill today and there wasn't one to be found.

The lady said they sold a ton lately.